ISLAMABAD (92 News) – A French climber stranded on top of one of Pakistan’s most deadly mountains Nanga Parbat is safe after a dramatic rescue operation, however, the search for her Polish climbing partner has been called off.

Elisabeth Revol and Tomasz Mackiewicz were climbing Nanga Parbat, nicknamed “Killer Mountain”, when they got stuck at 7,400m (24,280ft).

An elite climbing team who were on nearby K2 rushed to the rescue, scaling the mountain overnight to find Ms Revol alive.

Four members of the team, who had been attempting the first winter ascent of K2 – the second highest mountain in the world – were brought to Nanga Parbat by a Pakistani military helicopter.

They were dropped off about 1,000 metres below the lost climbers’ last known location.

It earned the nickname “killer mountain” after more than 30 climbers died trying to conquer it before the first successful summit in 1953.

In July last year, a Spaniard and an Argentinian were presumed dead after they went missing while trying to summit Nanga Parbat. 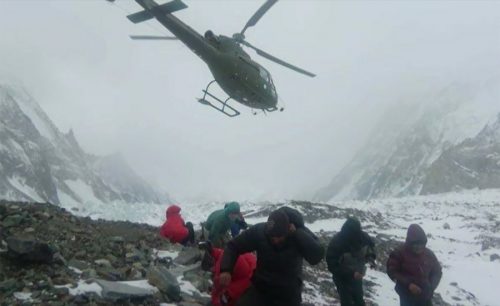