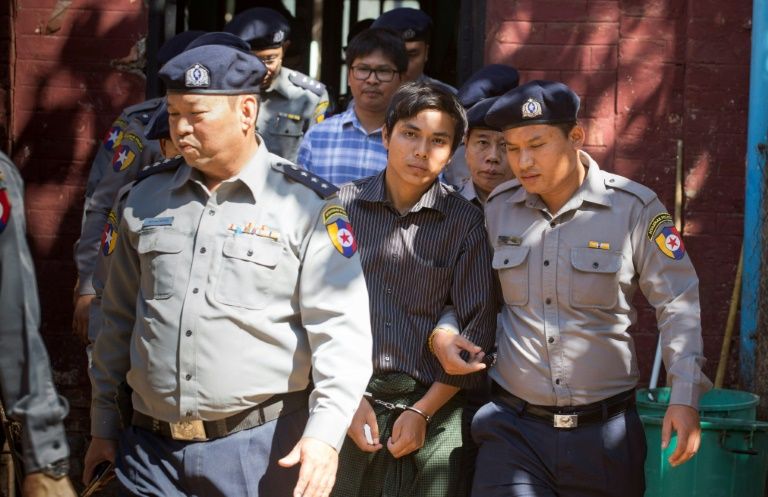 YANGON (AFP) - Two Reuters journalists detained for two months by Myanmar authorities were arrested over their investigation of a massacre of 10 Rohingya men, the news agency said in a report that detailed the grisly killings.

It is the first time Reuters has publicly confirmed what Myanmar nationals Wa Lone, 31, and Kyaw Soe Oo, 27, were working on when they were arrested on December 12 on the outskirts of Yangon.

The pair are now facing up to 14 years in prison on charges of possessing classified documents in violation of the colonial-era Official Secrets Act.

Their plight has sparked global alarm over withering press freedoms in Myanmar and government efforts to curb reporting in northern Rakhine state -- a crisis-hit region where troops are accused of waging an ethnic cleansing campaign against Rohingya Muslims.

Nearly 700,000 Rohingya have fled the area since last August, carrying stories of atrocities at the hands of troops and vigilante groups in the Buddhist-majority country.

Myanmar authorities deny the allegations but have virtually cut off northern Rakhine, barring independent media from accessing the conflict-hit areas.

On Thursday Reuters published a report describing how Myanmar troops and Buddhist villagers executed 10 Rohingya men in Rakhine's Inn Dinn village on September 2, 2017 before dumping their bodies into a mass grave.

"The Reuters investigation of the Inn Din massacre was what prompted Myanmar police authorities to arrest two of the news agency's reporters," the report said.

The account was based on testimony from Buddhist villagers, security officers and relatives of the slain men.

It included graphic photographs of the victims, hands bound kneeling on the floor before the killing -- and of their bodies in a pit after.

The Reuters report said witnesses denied there had been any major attack from Rohingya militants before the alleged massacre.

A Myanmar government spokesman could not be immediately reached for comment.

But Myanmar vehemently denies systematic abuses by its security officers, despite a mounting volume of evidence pointing to atrocities.

Judges have denied bail to the two reporters during a pre-trial hearing period, despite calls for their release from human rights groups and diplomats around the globe. The next hearing is scheduled for February 14.

WASHINGTON (Reuters) – Republican President Donald Trump left the White House on Wednesday after a tumultuous four years in office, hours before Democrat Joe Biden assumes the helm of a country beset by deep political divides and battered by a raging coronavirus pandemic.

MADRID (Reuters) – At least two people died and several were injured when a building in a central Madrid belonging to the Catholic Church collapsed on Wednesday after an explosion, Mayor Jose Luis Martinez-Almeida told reporters.

WASHINGTON (Reuters) - In his last address as the president, Donald Trump wished the incoming Joe Biden administration luck but avoided saying the name of the man who defeated him in the November elections.

Joe Biden to be sworn in as 46th US president today