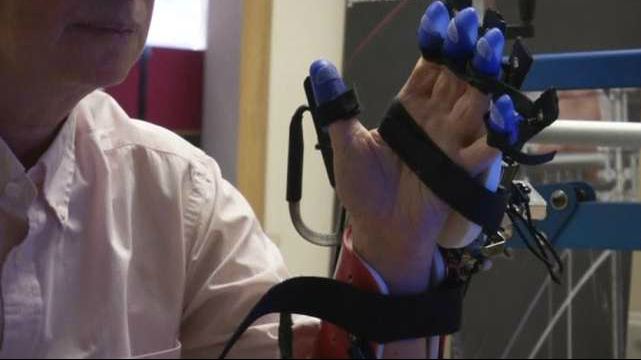 LONDON - A robotic glove designed to help stroke sufferers regain movement in their hands and rebuild their muscles has been developed as part of a collaborative project in Britain, the Netherlands, Germany and Italy. The device is called SCRIPT (Supervised Care and Rehabilitation Involving Personal Tele-robotics), and has been developed by researchers at the University of Hertfordshire and a team of European partners. SCRIPT has been designed to facilitate repetitive movement and exercise of the hand and wrist of patients, both within the chronic stage of illness and after they have been released from hospital. The gloves are fitted with sensors that allow patients' progress to be monitored and assessed by both patient and therapist. Thirty-four volunteers have been tested using the glove in tandem with specially-designed computer games, and results have proved encouraging. Double stroke survivor Shani Shamah, a former financial services worker, wasn't one of those involved, but she has twice used the device to help provide feedback to SCRIPT co-ordinator Dr Farshid Amirabdollahian, who devised the glove. Shamah was not expected to survive her injuries after a second stroke within a matter of days in April 2013 left her with bleeding on the brain. "I lost my speech, I lost the use of the whole of my left side, leg, arm, shoulder, hand, and through intensive physio in a special rehab unit I was re-taught to walk and to use my arm and hand, although I didn't have the advantage of having the equipment we've been showing here today," said Shamah. A stroke can force the sufferer's hand into a semi-permanent clenched posture, with a flexed wrist. The project aims to counteract such injuries by providing patients with repetitive, fun, exercises performed while wearing the glove. "The hand and wrist are in an abnormal position, the hand is fully closed, and the wrist is flexed, and what we want to do is to open the hand and extend the wrist, so that people can regain a normal posture of the hand and wrist and then they can practise the therapy," he said. "The glove that we designed provides some offset forces, so the fingers are pulled open and the wrist is pulled into full extension. With this in mind then people can start practising without those abnormal movements that are forcing the hand closed." The device records the patient's performance and sends this to a therapist, enabling them to tailor treatment remotely. It also frees up a therapist to treat multiple patients, while allowing recovering sufferers to rehabilitate themselves in the comfort of their own home, with the aim of increasing their time spent on rehabilitation. According to Naila Rahman, SCRIPT integrator, "the advantage of remote monitoring of the user's use of the system is that it allows the user to train in their own time. The trainer can train first thing in the morning, late in the evening when they come home from work basically, and they're not tied up to the therapist's availability." Amirabdollahian is an expert in rehabilitation robotics and assistive technologies and an associate professor in adaptive systems at the university. He says that in addition to the benefits of patients using the glove at home, the remote assessment of computerized data by therapists allows treatment to be easily individualized. "This adaptivity is a very important function because it allows us to have the system usable by people with severe stroke but also people with moderate and less moderate stroke," he added. Shamah recommends the therapy for stroke survivors like herself, and says it is far more interesting than the often boring exercises she endured on her own road to recovery. "I think it would be great, it really would be. I'm only sorry I didn't have the advantage of having this when I was rehab," said Shamah. "It's very boring when you just sit at a table and take out a ball from a box and put it down on the table next to you, and playing with theraputty, rolling it backwards and forwards, whereas here you can actually see like with the fruit game you could pick up the fruit, put it in the basket, and that can be quite an achievement. So I think for general use it would be brilliant, for therapy use." The prototype was developed as part of a 4.6 million euro (4.9 million USD) project undertaken by the University of Herts team, alongside project partners R.U. Robots Limited, the University of Sheffield, Twente University, Roessingh Research and Development BV, MOOG BV, San Raffaele S.p.A, and User Interface Design GMBH. It was part-funded by the European Commission under the 7th Framework Programme. Amirabdollahian says outside investment is needed in order for the final design to be ready within two years, and at a cost of less than 10,000 USD per glove it will be an affordable healthcare option for public hospitals. - Reuters