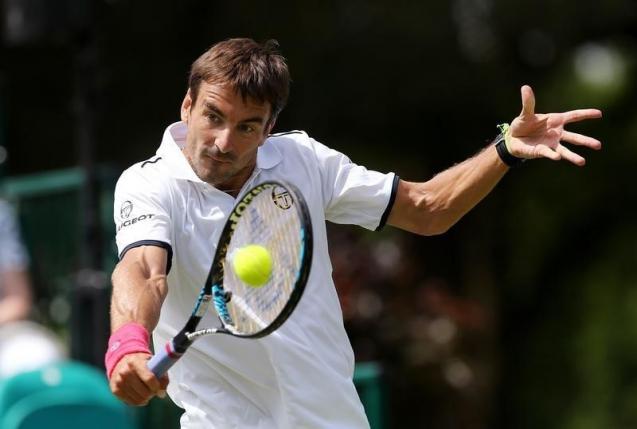 MADRID - David Ferrer has pulled out of Spain's Davis Cup team for next week's Group I tie away to Russia after failing to recover sufficiently from an elbow injury and will be replaced by Tommy Robredo. World number seven Ferrer, who withdrew from Wimbledon on the eve of the tournament, initially made himself available to Spain's new captain Conchita Martinez for the July 17-19 match in Vladivostok. However, he wrote on his Twitter feed on Friday that tests with his physio and Spanish tennis federation (RFET) doctor Angel Ruiz Cotorro had prompted his decision to stand down. "I don't know when I will be able to return to action," Ferrer wrote. "I will keep you posted." Spain, the five-times winners, will also be missing the likes of Rafa Nadal, Feliciano Lopez and Fernando Verdasco. They need a victory to have a chance of getting back into the elite World Group for next year's competition. Martinez announced a five-man team on Tuesday, which as well as Ferrer also included Pablo Andujar, Daniel Gimeno-Traver, Marc Lopez and David Marrero. Ferrer will be replaced by Robredo, the world number 19, and Jaume Antoni Munar will come in for Gimeno-Traver, the RFET said in an emailed statement. "From the start Tommy Robredo accepted the challenge of helping us in this tie," Martinez said. "He has already been preparing this morning for the match, for which I will also count on the presence of Jaume Antoni Munar, one of our promising youngsters," she added. Nadal, Ferrer and other top Spanish players became embroiled in a dispute with the Spanish tennis federation (RFET) last year over the appointment of Gala Leon as the nation's first female Davis Cup captain. After weeks of upheaval at the federation, which is being investigated for alleged financial irregularities, and the naming of a new president, Leon was sacked last week. Martinez, a former Wimbledon champion who is also Spain's Fed Cup captain, was named to replace her until the end of the year. She has managed to bring Ferrer and Robredo immediately back into the fold and suggested this week Nadal and the others would be available for the 2016 edition. Russia, who won the Davis Cup in 2002 and 2006, have selected the relatively little-known Konstantin Kravchuk, Evgeny Donskoy, Andrey Rublev and Karen Khachanov. -Reuters