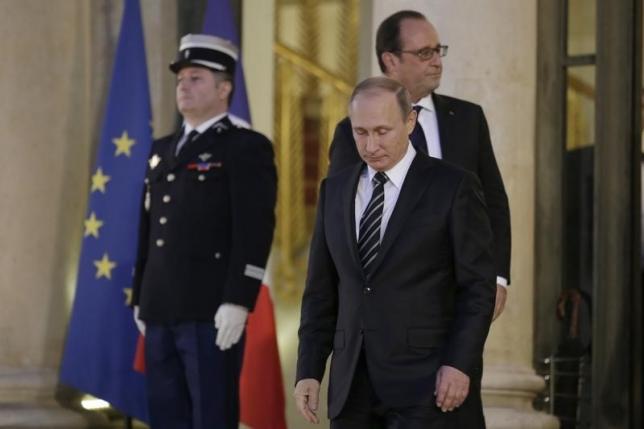 UNITED NATIONS - Russia revived a push for United Nations approval of international military campaigns combating Islamic State, setting up a showdown with France over its rival bid for a UN Security Council resolution on the issue. Russia circulated to the 15-member council an updated version of a draft resolution it first proposed on Sept. 30, diplomats said. Veto power Britain had dismissed the initial Russian draft and few negotiations were held on that text. Russian UN Ambassador Vitaly Churkin told the council the text had been updated to focus more on combating Islamic State in reaction to recent attacks by the militant group, according to diplomats at the closed-door meeting, who spoke on condition of anonymity. Diplomats said there had been no major changes and that Russia had scheduled negotiations for Thursday. Russia revived its draft after France said it would push for a resolution on terrorism following the deadly attacks in Paris on Friday for which the militant group has claimed credit. French UN Ambassador Francois Delattre said it would be "short, strong and focused on the fight against our common enemy." "In this respect we consider the Russian proposal is a contribution that we will carefully study," Delattre told reporters, signalling that France was not prepared to team up with Russia on a joint resolution. He said the French draft would have one clear goal "to make sure that the international community is united in the fight against Daesh (Islamic State)." Diplomats said the updated Russian draft still called on states involved in military efforts against the Islamic State group and other militants to coordinate with the countries where they were operating. In the case of Syria, this would mean coordinating military activities with President Bashar al-Assad's government. A US-led coalition informed Syria when it began air strikes more than a year ago but did not seek permission. The coalition members have said they are acting in collective self-defence at the request of neighbouring Iraq. Russia began air strikes in September after it said Syria had requested its military assistance. In October, a Russian passenger plane crashed in Egypt's Sinai Peninsula, killing all 224 people on board. Russia and Western governments have said the plane was likely brought down by a bomb and on Wednesday Islamic State's official magazine carried a photo of a Schweppes drink it said was used to make an improvised bomb that brought down the plane. The Islamic State group has also claimed responsibility for coordinated attacks in Paris last Friday in which 129 people were killed. -Reuters