According to the ISPR, regional security situation and matters of mutual interest, including enhancement of bilateral defence and security cooperation, were discussed.

The deputy minister expressed his appreciation for Pakistan Army’s achievements against terrorism and expressed requirement of greater cooperative and collaborative approach among global community to defeat extremism. 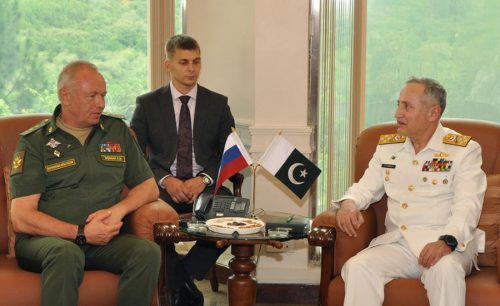 Upon arrival at Naval Headquarters, Deputy Minister of Defence of the Russian Federation was received by Chief of the Naval Staff Admiral Zafar Mahmood Abbasi. A smartly turned out contingent of Pakistan Navy presented him the guard of honour. Thereafter, Admiral Zafar Mahmood Abbasi introduced the visiting dignitary to the Principal Staff Officers.

During the meeting, detailed discussions on bilateral defence collaboration in diverse fields were held. The visiting dignitary lauded the commitment and performance of Pakistan Navy in maintaining peace and stability in the regional maritime domain. It is expected that the visit will further enhance defence collaboration and strengthen defence ties between the two countries in general and navies in particular.