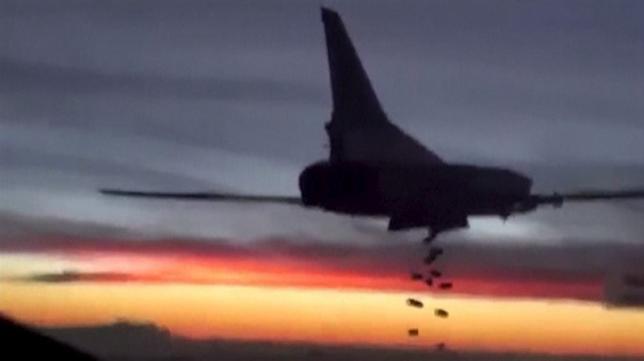 BEIRUT – Russian and Syrian warplanes launched dozens of air strikes on Islamic State-held areas of eastern Syria on Friday, after the group's fighters staged an assault on an air base near the city of Deir al-Zor, a monitoring group said. In at least 50 bombing raids, towns across Deir al-Zor province, including near the Iraqi border, were hit and dozens of vehicles and fuel oil tankers were destroyed, the British-based Syrian Observatory for Human Rights said. Eight civilians were killed in the bombardment, including three children, the Observatory said, describing the intensity of the strikes on the province as "unprecedented". Deir al-Zor province links Islamic State's de facto capital in Raqqa with territory controlled by the group in Iraq. Syrian government control is limited to an air base and part of Deir al-Zor city. The strikes were launched after Islamic State fighters launched a fresh attempt at dawn to overrun the air base where government troops are holed up just south of Deir al-Zor city. At least 20 Islamic State fighters and eight soldiers have been killed in clashes there so far. Fighting has surged across the country since Russia launched an air campaign in support of President Bashar al-Assad on Sept. 30 with the stated aim of hitting Islamic State but mostly bombing other rebel groups in the west of the country. Islamic State has also come under pressure as a U.S.-led coalition, accompanied by some rebel groups on the ground, wages air strikes against it in eastern Syria. –Reuters