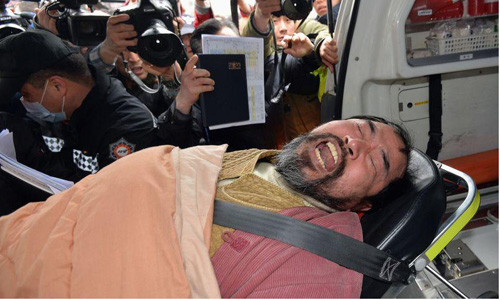 SEOUL (Reuters) - (Reuters) - South Korean police said on Friday they are investigating possible links between a knife attack on the US ambassador to Seoul and the assailant's multiple visits to North Korea, as they also sought to charge him with attempted murder. US ambassador Mark Lippert needed 80 stitches after his face was slashed at a forum discussing Korean unification in the capital, Seoul, on Thursday. The attack was carried out by a Korean nationalist who said he was protesting against annual US-South Korean military exercises that began this week. A senior official in the team investigating the attack said police had requested a formal detention warrant, on charges that include attempted murder, for the assailant, identified as 55-year old Kim Ki-jong. Investigators have established that Kim made seven visits toNorth Korea between 1999 and 2007. "We are investigating whether there is any connection between the suspect's visits to North Korea and the crime committed against the US ambassador," Yoon Myeong-seong, chief of police in Seoul's central Jongno district, told reporters. Most South Koreans have never visited the secretive North. The two states technically remain at war under a truce that ended the 1950-53 Korea War, and a heavily armed border divides the peninsula. Kim denied on Friday that his actions were connected in any way with North Korea, calling the suggestion "nonsense", and told reporters he had never been to the North, as he left a police station and headed to court for his warrant hearing. According to South Korea's Unification Ministry, Kim planted trees near the North Korean city of Kaesong, near the border, during his visits there. The ministry said it had authorized his visit requests at the time. Kim also faces charges for assaulting a foreign envoy and obstructing business operations. Police raided his home and office early on Friday, looking for evidence of whether he also broke a state security law that bans supporting North Korea. In 2010, Kim tried to attack the Japanese ambassador to North Korea by throwing a piece of concrete and was given a suspended jail term, according to police. Kim was a member of the pro-unification group that hosted the Thursday forum. North Korean state media has said the attack against Lippert was "deserved punishment" for the military drills, calling the assault "the knife of justice". South Korea's Unification Ministry condemned the statement as "senseless". The South Korean government ordered increased security for diplomatic missions, including the US embassy, and police said they were providing protection for Lippert. Lippert was accompanied by a bodyguard when the attack took place on Thursday. Police were also present, although not at the request of the US embassy or organizers. The United States is South Korea's closest ally and maintains a military presence that includes 28,500 personnel. That has drawn protest and criticism from some in South Koreain the past but public opposition has eased in recent years.