Sacrifices of our children unforgettable: COAS

In a statement issued by the Inter-Services Public Relations (ISPR), the COAS in his message on the occasion of 3rd anniversary of the APS attack, said that the sacrifices of our beloved innocent children symbolize our undeterred resolve in love of our motherland.

He said: “Your sacrifice has not gone in vain, adding that we owe this improving peace to you”.

Earlier, in his message on the occasion, Prime Minister Shahid Khaqan Abbasi called the attack a black day in the country’s history, saying the terrorists brutally targeted innocent children.

“The Pakistani nation has made unprecedented sacrifices in war against terrorism — more than any other nation in the world — and we are the first nation to defeat terrorists in our region,” Abbasi said in a message issued from his office.

On December 16, 2014, six terrorists stormed the school and killed over 140 people, including 122 schoolchildren and their teachers. The Tehreek-e-Taliban Pakistan (TTP) Khalifa Mansoor group had claimed responsibility. 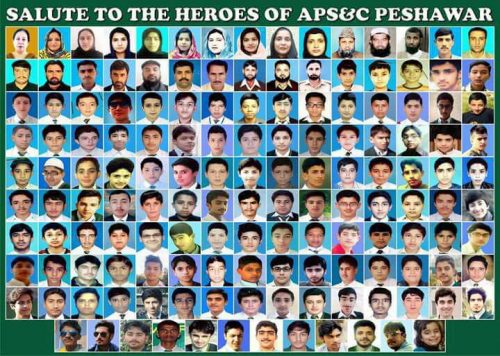