Saudi-led forces said on Thursday they would respond harshly against Yemen’s Houthi rebels following attacks on citizens in border areas, hours after the kingdom offered a five-day humanitarian truce if the Shi’ite militia stopped fighting.

Brigadier General Ahmed Asseri, spokesman for the Saudi-led coalition, said the Houthis had changed the situation by targeting cities in recent days, and vowed that the coalition would go after leaders of the rebel group.

“The Houthis are now targeting the borders of the kingdom and the situation is that we will defend our citizens,” Asseri told Reuters, adding that 15 people were wounded in Houthi shelling on the city of Najran on Thursday evening. 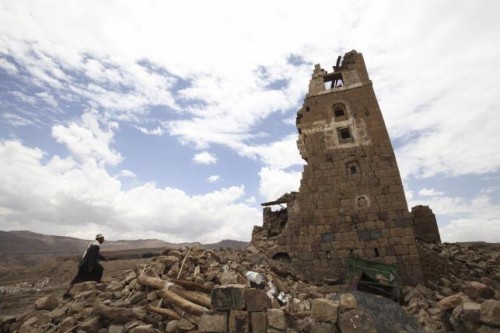 “Coalition forces will deliver a harsh response starting this moment, so that those who carried out this operation will pay the price,” he said earlier on Saudi state television.

Asseri said Saudi-led forces would keep all options open, but declined to say if a ground offensive was being planned.

The remarks came hours after Saudi Foreign Minister Adel al-Jubeir announced at a joint news conference with U.S. Secretary of State John Kerry that the kingdom was ready to offer a five-day humanitarian ceasefire if the Houthis honoured the truce.

“The pause will affect all of Yemen for a period of five days,” Saudi foreign minister Adel al-Jubeir said. “The actual date will be announced shortly as well as the requirements.

“This is all based on the Houthis complying with the ceasefire.”

International concern about Yemen’s dire humanitarian situation has grown as fighting, air strikes and an arms embargo have caused civilian deaths, internal displacement, destruction of infrastructure and shortages of food, medicine and fuel.

The offer of a truce came days after the Houthis had shelled Saudi border towns, prompting renewed coalition air strikes in Yemen, and as the rebels advanced into a last central area of Aden, a city whose fate is seen as pivotal to Yemen’s civil war.

Kerry welcomed the Saudi truce offer and said neither Riyadh nor Washington was talking about sending ground troops to Yemen.

Asseri had said late on Wednesday that all options were open, including ground operations, to stop attacks on Saudi towns.

The United States has supported the Saudi-led coalition, which began strikes against the Houthis and forces loyal to ex-president Ali Abdullah Saleh on March 26 with the aim of restoring the government of President Abd-Rabbu Mansour Hadi.

Riyadh fears the Houthis, who are allied to its foe Iran, will dominate Yemen, and that the advance of Shi’ite Houthi fighters into Sunni areas will provoke sectarian fighting that al Qaeda can exploit.

Iran has denied Saudi and Yemeni government charges it arms and trains the Houthis.

Air raids to suppress further Houthi shelling struck the group’s stronghold of Saada, near Yemen’s Saudi border, and the small port of Maidi on Wednesday.

On Thursday, Houthi-linked al-Masirah TV showed fighters in a key district of Aden, and reported that the presidential palace was in their hands.

In a letter to the United Nations, the Houthis called for international action to stop what they described as Saudi aggression and crimes against the Yemeni people. 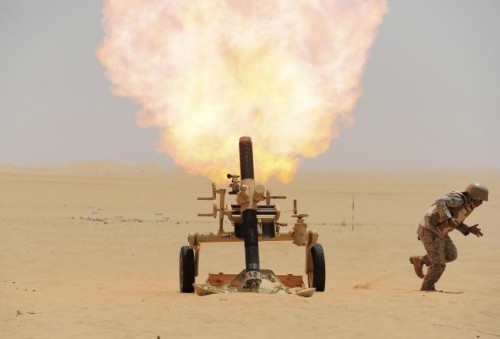 Villagers from Yemen’s northern Hajah province say many residents have left their homes because of the Saudi bombardment and are seeking refuge in other areas where they lack food.

Most of those displaced are from the Haradh district near the border with Saudi Arabia, an area which has come under heavy artillery and air attack since the Houthis shelled Saudi villages from there.

Earlier, the Houthis said they had shelled a Saudi air defence facility north of Najran after killing eight people in the town on Tuesday and Wednesday. Another two Saudis were killed by Houthi shells in Jizan province.

The Arab coalition has been wary of putting boots onto the ground in Yemen, aware of the difficulties of tackling a well entrenched guerrilla army in its own mountainous terrain.

A Saudi Apache helicopter was damaged in an emergency landing near the border on Thursday, a Gulf official said, denying an earlier report by al-Masirah that the aircraft had been shot down by the Houthis. He said the pilots were safe.

Fighting across Yemen on Wednesday killed 120 people, mostly civilians, including at least 40 who were trying to flee Aden in a boat that was struck by Houthi shells, rescue workers and witnesses said.