ISLAMABAD (92 News) – The Supreme Court (SC) on Friday forbid the Pakistan Railways from selling the land of federal and provincial governments.

During the hearing, the bench has disposed of a case pertaining to Railways land and barred Pakistan railways from selling its land. The bench said the land which is not required for Railways operation can be leased out for a period of five years.

The court also ordered that the railways could not grant the land, owned by the federal and provincial governments, on lease for more than five years.

The railways could not launch a housing society on the land. Moreover, the department will take care of the land that it could not be encroached by anyone.

Addressing to Advocate General Sindh during the hearing, Chief Justice Nisar said these lands remain with the railways department prior to partition of India. “Do you want back your land,” the top judge asked.

The Sindh advocate general said that the land, which is not required to use for railways, should return to the provincial government. “If the railways want to use the land…the department would have to generate revenues, we can also do the same,” he added.

The judges remarked that the railway land owned by the government and the department could only utilize these lands. 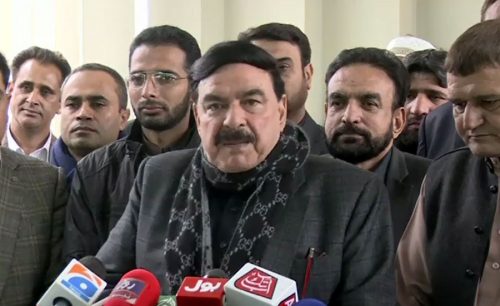 While speaking to the journalists outside the Supreme Court, Minister for Railways Sheikh Rasheed expressed his anger over the federal government decision to appoint Opposition Leaders in National Assembly Shehbaz Sharif as Public Accounts Committee (PAC) chairman.

Shiekh Rasheed said that Shehbaz Sharif is bigger thief than former prime minister Nawaz Sharif. “It is better that the accountability process should be removed instead the thief or dacoit to be appointed on the chairman seat,” the minister said.

The railways minister also explained that he understand the difference between the ‘pray and cheat’.