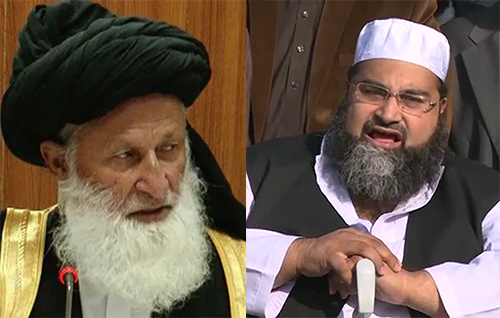 ISLAMABAD (92 News) – A scuffle broke out between Council of Islamic Ideology (CII) Chairman Moulana Muhammad Sheerani and Allama Tahir Ashrafi during a meeting of CII in Islamabad on Tuesday.

As per details, an important meeting of Council of Islamic Ideology (CII) was held in Islamabad on Tuesday and the scuffle broke out when Allama Tahir Ashrafi raised objection during the session and tried to leave the room after which the religious leaders started using bad language.

Moulana Muhammad Sheerani and Allama Tahir Ashrafi accused each others of using bad language and reaching out for each other’s collars.

On the other hand, Moulana Muhammad Sheerani said that Allama Tahir Ashrafi created hue and cry during the meeting and continuously used bad language.

The meeting had to be adjourned following the scuffle, while some religious leaders have started efforts for patchup between the two leaders.