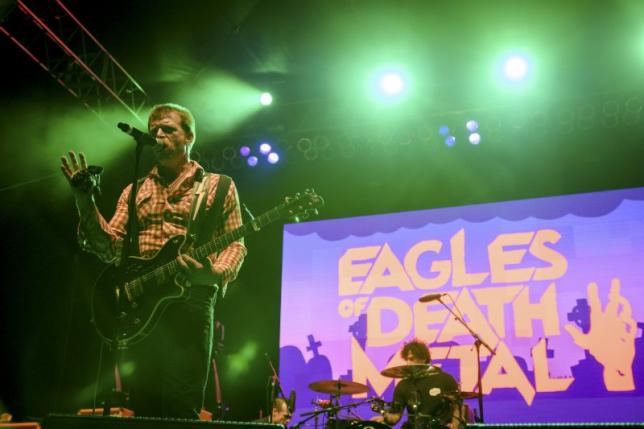 PARIS - The California rock band that was playing in Paris on the night of the Nov. 13 attacks survived the massacre at their concert, but others died seeking shelter in a dressing room, the group’s lead singer said in an interview with international news channel Vice. Jesse Hughes of the band Eagles of Death Metal spoke to Vice in an interview that airs on its website next week. A 30-second excerpt was posted on Saturday. It was the first time a member of the band had spoken about the shootings, Vice said. Bombings and shootings carried out by Islamic State militants in Paris killed 130 people, including 89 who were attending the US band's performance at the Bataclan concert hall. “Several people hid in our dressing room and the killers were able to get in and killed every one of them – except for a kid who was hiding under my leather jacket,” Hughes said in the interview, as the band’s co-founder, Josh Homme, sat next to him. “People were playing dead and they were so scared,” Hughes said, his voice quavering. “A great reason why so many were killed is because so many people wouldn’t leave their friends. So many people put themselves in front of people.” In a statement on its Facebook page earlier this week, the band said those killed that night included Nick Alexander, its merchandising manager, and three record company “comrades” of the band: Thomas Ayad, Marie Mosser and Manu Perez. The band, which also goes by the acronym EODM, was on stage at the Bataclan when gunmen opened fire with automatic rifles. A brief video clip taken inside the hall as the assault began was posted to Instagram and has since been shown on television. In it, three EODM musicians can be seen on stage in the middle of an instrumental performance as gunfire erupts, prompting the drummer to duck for cover while one guitarist flees the stage and another stands frozen. -Reuters