In his latest tweet, he said that Punjab Chief Minister Shahbaz Sharif’s Ashiana housing scam is tip of iceberg, adding that much bigger scams will be uncovered once probe by the National Accountability Bureau (NAB) starts on Sasti Roti, Metros, especially Orange Line Metro Train where the contract has been kept under wraps, massive kickbacks in Punjab road construction contracts, Danish schools etc.

The PTI chairman went on to say that Shahbaz Sharif is crying about victimization already?

“I faced probe for one year in the SC despite never holding any public office so why is Punjab CM attacking NAB,” Khan asked. 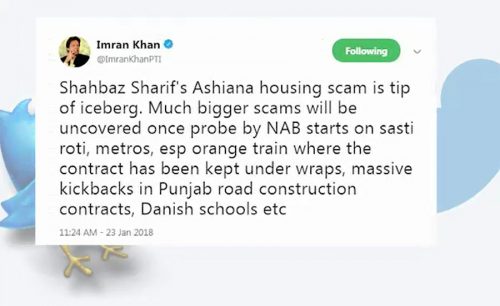 If he is clean he should face all charges like I did and disprove them, he added.

On Monday, the Punjab CM appeared before the National Accountability Bureau’s (NAB) combined investigation team (CIT) in connection with an alleged graft in a housing scheme.

The anti-corruption watchdog had issued a notice to Punjab Chief Minister Shahbaz Sharif asking him to appear before a combined investigation team (CIT) on January 22 (Monday) in connection with an alleged graft in a housing scheme.