Short, who started his innings with several edges and false shots that went for boundaries at the small ground, scored 76 from 44 balls as the Australians reached 245 for five with seven deliveries remaining.

The run chase eclipsed the 236 for six West Indies achieved in beating South Africa in Johannesburg in 2015.

Short and captain David Warner (59), however, put on 121 runs in 8.3 overs to give the visitors the ideal start before Glenn Maxwell, who scored 31 from 14 balls, and Aaron Finch (36 not out) ensured they got home.

Having won their previous three matches before Friday, Australia had already qualified for the final of the tri-series, that also includes England, at the same ground on Feb. 21.

New Zealand had been strong favourites to join them in the final at the innings break after Guptill and Munro scored at more than 12 runs an over, exploiting the short boundaries down the ground. 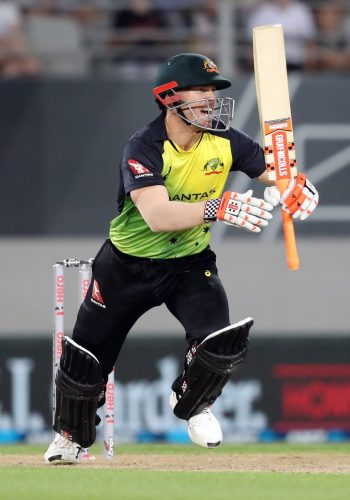 Munro hit Andrew Tye for three successive sixes off the first three balls of the 11th over but was then undone by a cleverly-disguised slower delivery on the next and was caught at wide long on by Maxwell.

Guptill then picked up where Munro had left off, reaching his second Twenty20 international century in 49 deliveries before Tye had him caught by Maxwell at deep midwicket to leave the hosts 212 for three in the 17th over.

Australia then dragged the New Zealand innings back with three wickets for four runs in six deliveries. Ross Taylor hit two sixes in an 18-run final over from Tye to propel New Zealand to their equal-highest T20 score.

New Zealand face England in Hamilton on Sunday, with the hosts holding the advantage having won their game in Wellington on Tuesday by 12 runs.