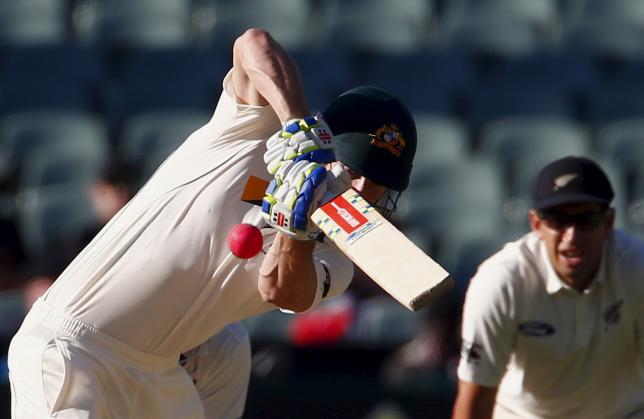 Paceman Peter Siddle struck the winning runs under the Adelaide Oval floodlights to seal the series-clinching victory after Australia all but collapsed late on day three of the third and final test.

With the hosts reduced to 185-7 in pursuit of a modest victory target of 187, Siddle pushed two runs past point and his injured batting partner Mitchell Starc hobbled up and down the pitch with a broken foot to complete a nervous three-wicket win.

"It was certainly a very tense finish. Thankfully we were on the right side," Australia captain Steven Smith told reporters, praising the inaugural day-night test as a "great innovation".

"(It was) a great spectacle. To get 123,000 people through the gates in three days is absolutely amazing."

Australian batsman Shaun Marsh fell just short of a half-century with victory in sight but his 49 anchored important stands with Adam Voges and his younger brother Mitchell.

Fired by a five-wicket haul by seamer Trent Boult, who swung the specially developed pink ball with venom, New Zealand mowed through the top order and captured late wickets to turn what should have been a procession into a cliff-hanger.

The 187 runs ultimately proved too few to defend and Siddle's inelegant shot to seal the win sparked a thunderous roar from the crowd of 33,923.

Paceman and man-of-the-match Josh Hazlewood was vital for the hosts, capturing a career-best 6-70 in the absence of injured spearhead Mitchell Starc to limit New Zealand to 208 in the third innings.

Boult dismissed Voges for 28 straight after the dinner-break but all-rounder Mitchell Marsh joined his older sibling at the crease and compiled a brisk 28 to push Australia within 26 runs of their target.

Mitchell Marsh bashed a six over the head of spin-bowling all-rounder Mitch Santner but was out swiping at the next delivery, the skied top-edge well-caught by a scrambling Kane Williamson.

Shaun Marsh grew jumpy as victory and his 50 approached and he holed out with a needless push at a Boult delivery which ended in the slips and left Australia 11 runs short of their target.

Wicketkeeper Peter Nevill also fell to Boult, caught behind for 10, before Siddle finally pushed Australia over the line.

The match was won earlier in the day, however, when Hazlewood took three wickets as New Zealand could only add 92 runs to their overnight total of 116-5.

The 24-year-old struck with the ninth ball of the day to remove wicketkeeper BJ Watling for seven and had Mark Craig nick behind for 15.

He later wrapped up New Zealand's innings by bowling Boult for five, with Mitchell Marsh capturing 3-59.

"We've got a bit of a mantra within our team, that if you are going to get beaten, then make it bloody tough for the opposition to do so."