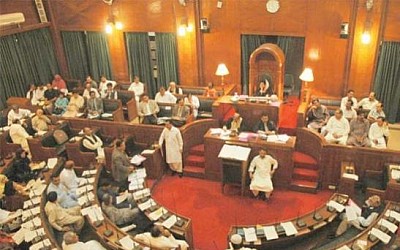 KARACHI (92 News) – Rumpus marred the Sindh Assembly session as the treasury and opposition members exchanged hot words with each other on Monday. Speaking on a point of order, Opposition Leader Shehryar Mehr said that the Sindh government should tell whether its priority is drinking water for people or advertisements worth millions of rupees. In reply, provincial minister Sharjeel Memon said that Shehryar Mehr should not tell a lie and prove the advertisements worth millions of rupees. The provincial ministers also launched a tirade against Nusrat Sehr Abbasi who protested against it. The session observed a one-minute silence to pay tribute to the late justice Rana Bhagwan Das. The MQM MPAs protested against the missing of party workers. Deputy Speaker Shehla Raza presided over the session.