Political, social and religious organizations, besides the Sindh culture department, administrations of various schools, colleges and universities held a variety of events, including seminars, debates, folk music programmes, dramas and literary sittings to mark this day, introduced in 2009.

The day was first observed in reaction to criticism of then president Asif Ali Zardari for wearing a Sindhi cap during an official visit to Afghanistan.

The Sindhi people express their love and culture by wearing Ajrak and Sindhi Topi (cap), which are regarded as identities the Sindhi culture and a symbol of the Indus Valley civilization.

As the demand of Topi and Ajrak soared following the announcement of Sindhi Cultural Day, the shopkeepers have raised the prices. The shopkeepers said that they ran out of stock due to high demand.

In his message on the occasion, PPP chairman Bilawal Bhutto Zardari congratulated the people of Sindh on the festivities being observed across the world to celebrate the rich Sindh culture that we inherited from Indus valley civilization. 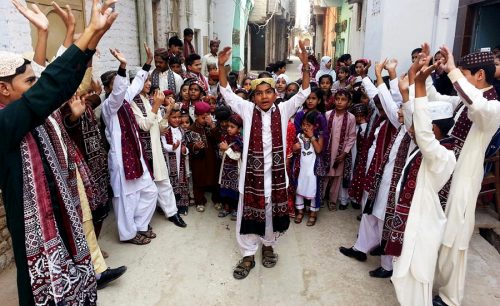