KARACHI (92 News) – The Sindh Education Department on Wednesday suspended the registration of all the campuses of The City School and Beaconhouse over failure to comply with court orders.

According to a notification issued by the provincial education department, the registration of 56 campuses of The City School and 65 of Beaconhouse has been suspended.

The registration was suspended for charging excessive tuition fee in defiance of the Supreme Court’s ruling in this regard. 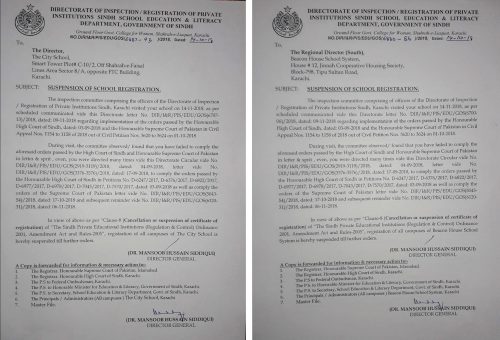 The Director of Private Schools Sindh said it had time and again written letters to both the school systems calling for implementation of the verdict regarding fee hike but no avail. If the court order is enforced within seven days of the suspension, their registration will be restored and upon failure, the schools will be sealed in presence of a judicial magistrate.

Earlier in October, the Sindh High Court barred private schools from hiking fees by more than 5 per cent and ordered them to accept dues as per the old fee structure.