Spieth back in Sydney to defend title that sparked golden year 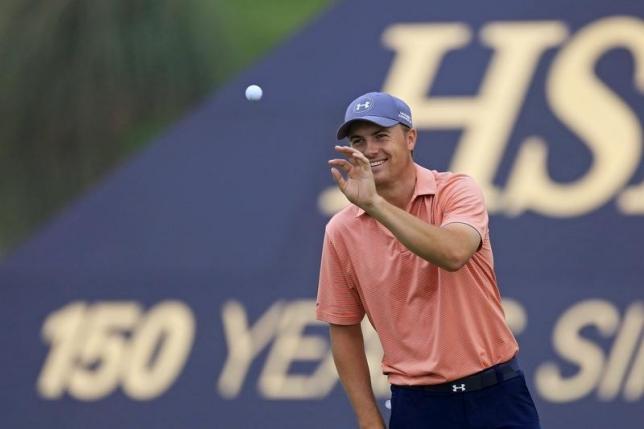 Spieth back in Sydney to defend title that sparked golden year

SYDNEY – World number one Jordan Spieth returns to the course where he rediscovered the art of winning last year to defend the Australian Open title he clinched with a quite brilliant final round. The American arrived in Sydney last November ranked 14th in the world with just one US PGA title to his name but shot a course record 63 to beat Rory McIlroy and Adam Scott, then the top two in the world, and secure the Stonehaven Cup. It triggered a year in which everything the 22-year-old Texan touched seemed to turn gold as he captured his first two majors at the U.S. Masters and U.S. Open and won the Tour Championship to sew up the Fedex Series. "I didn't think it would launch that type of year," Spieth told reporters at The Australian Golf Club on Tuesday. "But in that Sunday round I really learned how to close in my head. I played one of the best rounds of my life when I really needed it. "I really had that mental edge over the weekend to really close the deal. I had it for my whole life but I had lost it for a while. Winning here really launched it." Despite his remarkable year, Spieth still believes he can get better. "If I could somehow duplicate that year for the rest of my career, I'd be pretty pleased," he conceded. "But there's a chance it could all come together and we could improve on the last year. I have to believe that, but I do believe it." Adam Scott, who leads a strong local contingent at his home Open, is still seeking his first title of the year after a horror third round saw him fall out of contention at the Australian Masters last week. "I think he's the guy to beat this week," Spieth said of the 2013 U.S. Masters champion. "He's fresh and he's probably got a bit of a chip on his shoulder too after last week, especially being back home and everyone saying you haven't won since 2014. Guaranteed he doesn't like hearing that. "If I can get into contention, I feel my game is on point ... I'm looking forward to trying to do exactly what I did last year." Former world number one Lee Westwood and 2011 U.S. Open champion Darren Clarke are among a handful of European Ryder Cup veterans who will be teeing off for the first round on Thursday. Another local hopeful is Peter Senior, who won the Australian Masters last week at the age of 56. Senior also won the Australian Open in 2012. "It's inspiring that you can play this great game for so long and still be winning," Spieth added. "When I'm 56, I'll maybe be on a beach somewhere where nobody knows me." –Reuters