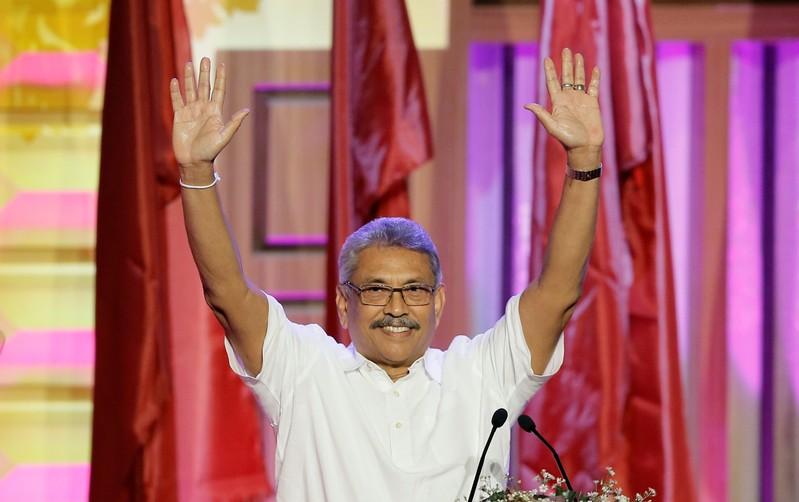 COLOMBO (Reuters) - Sri Lanka’s former defence chief Gotabaya Rajapaksa on Wednesday formally launched his presidential campaign, promising strong national security measures if he wins the Nov 16 election in the island nation still reeling from Easter Sunday bombings. Supporters hail Rajapaksa for winning a 26-year war against Tamil Tiger separatists a decade ago under his brother, then-president Mahinda Rajapaksa, who attempted a return to power last year as prime minister but was blocked by a court. Detractors criticize the family’s sway over Sri Lankan politics and close ties to China, which loaned billions of dollars to Sri Lanka under Mahinda Rajapaksa. They accuse Gotabaya Rajapaksa, commonly referred to as Gota, of human rights abuses during the civil war, which he denies. The Rajapaksas’ popularity has risen in recent months after it emerged that President Maithripala Sirisena’s government failed to act on repeated intelligence warnings from India ahead of Islamist attacks on churches and luxury hotels that killed more than 250 people on April 21. Launching his campaign in Sri Lanka’s ancient city of Aruradhapura known for its Buddhist history, Gotabaya Rajapaksa said the government had failed to ensure security. “Under Mahinda Rajapsaksa’s government, we created a safer country. We created an environment in which people could take a journey without a fear of bomb attacks. But this government has changed that situation,” Rajapaksa, clad in a sleeveless maroon shirt, told thousands of supporters the Sri Lanka Podujana Peremuna (SLPP) Party, which is led by his brother Mahinda. “If you fulfil your responsibility on (Nov.) 16th, I promise to ensure a safer country,” he added. He did not elaborate on the measures he might implement. He has previously said he would stop the spread of Islamist extremism by rebuilding the intelligence service and surveilling citizens. Echoing his party line, he said he would release all the “war heroes in prisons for various framed allegations” on Nov. 17 if he wins. Rajapaksa has accused Sirisena’s government of focusing on ethnic reconciliation and human rights to the detriment of national security in the Buddhist-majority nation of 22 million. He accuses Sirisena’s administration of dismantling a military intelligence cell of 5,000 people established in 2011 to track Islamist groups in eastern Sri Lanka, an allegation Sirisena’s government denies. Rajapaksa also promised to provide free fertiliser to farmers, write off all agricultural loans and find a scientific approach to ending human-elephant conflict in farming areas. Rajapaksa’s main rival is Housing Minister Sajith Premadasa, who is popular among the rural poor and will kick off his campaign on Thursday. Early on Wednesday, Sirisena’s centre-left Sri Lanka Freedom Party (SLFP), which has been divided into pro- and anti-Rajapaksa factions, pledged support to Rajapaksa, a move that could further boost his electoral chances. However, Rajapaksa faces a legal case on misappropriating state funds and allegations of human rights abuses when he was the defence chief. He has denied any wrongdoing.