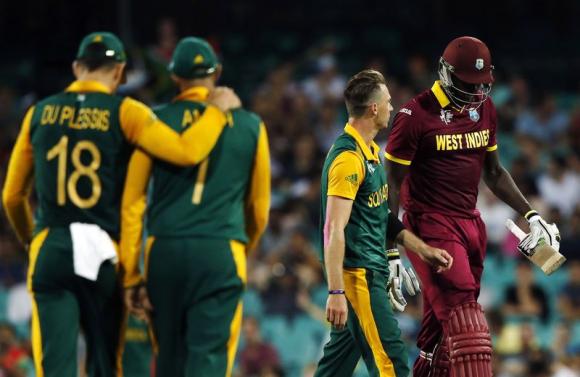 MELBOURNE (Reuters) - South Africa's impressive depth was underlined in their emphatic World Cup win over West Indies on Friday and with paceman Vernon Philander and JP Duminy out injured, the Proteas will again rely on their "bench" to shine against Ireland. Captain AB de Villiers may have grabbed the headlines with his sparkling 162 off 66 balls against the Caribbean side but South Africa's reserves gave the team a big boost after their confidence was rocked by the 130-run thrashing by India. Rookie batsman Rilee Roussow scored 61 off 39 balls after replacing Duminy in the middle order, while Kyle Abbott, in for seamer Philander, took two wickets, including the prized scalp of West Indies talisman Chris Gayle for three runs. All-rounder Farhaan Behardien said building a strong bench had been an "emphasis" for South Africa for some six months leading into the World Cup. "We played against the West Indies in South Africa, and... our bench was so strong," Behardien told reporters at Canberra's Manuka Oval, where they play Ireland on Tuesday. "Rilee, what a wonderful player. He came in and scored two hundreds in South Africa against the West Indies when he was on the bench. "(All-rounder Wayne) Parnell was on the bench against West Indies, picked up four wickets in the last ODI, and similarly (left-arm spinner) Aaron Phangiso is waiting in the wings, and when he steps up to the plate, he'll be asked to do a job. "The squad of 15 is vitally important to our cause, and going forward, you never know there might be an injury or somebody might pick up a stomach bug or whatever. The emphasis is on the 15 instead of 11." After playing West Indies in Sydney following the India loss in front of 87,000 at Melbourne, Behardien said the team were enjoying the relative quiet of the Australian capital. Two players, paceman Dale Steyn and batsman Faf du Plessis, have been worried about events back home however, tweeting pictures of a bush-fire near family homes south of Cape Town. Family members have travelled with the South Africa camp to Canberra and Behardien said a good support structure was in place to help Du Plessis and Steyn, who will play his 100th one-day international against Ireland. "We all know what a wonderful performer he's been over the years," Behardien said of the 31-year-old fast bowler. "We'll try and celebrate his 100th game with a win and we'll be fighting tooth and nail come tomorrow."