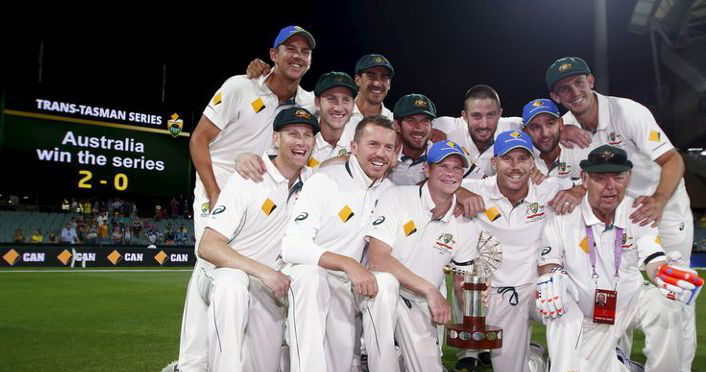 ADELAIDE - The carefully choreographed debut of day-night test cricket in Adelaide threw some time-honoured conventions out the window but offered a glimmer of hope for the survival of the game's oldest format.

Players and purists regard tests as the pinnacle of the game but their enthusiasm for five-day matches has been unmatched in the terraces of most cricket nations for years.

So the total attendance of 123,000 fans at Adelaide Oval for a game that lasted less than three days is certain to have struck a chord with the sport's power-brokers, many of whom were onlookers at the venue.

"The inaugural day/night test in Adelaide was a huge success, enjoyed by cricket followers across the world," International Cricket Council Chief Executive David Richardson, who attended the match, said in a statement on Monday.

"Day/night tests will not be feasible at every venue, it certainly provides a new dimension for players, spectators, broadcasters and fans alike and it is here to stay."

Adelaide tests are traditionally well supported by local fans and interstate visitors but the total attendance was a record in the city for a non-Ashes fixture.

The mark was also a stark contrast to the disappointing turn-outs in the first two tests in Brisbane and Perth.

The series-opener at the Gabba drew 52,000 spectators in total, while the 47,000 that flocked to day one in Adelaide easily outstripped the 40,000 who trickled through the gates for the entire test at the WACA in Perth.

Perhaps more encouragingly, the first-day night test also drew a huge armchair audience in Australia for local free-to-air broadcaster Channel Nine, which has been an ardent supporter of CA's efforts to hold a floodlit test.

Some 3.19 million people tuned in to the final day's play, according to Channel Nine, the highest rating day of cricket in the current 2015/16 season.

"It would seem that Adelaide is a fantastic place for it, and there are other venues around the country," he told local radio on Monday.

Under Sutherland, CA has long championed day-night cricket and engaged local manufacturer Kookaburra nearly a decade ago to produce a ball that could both be seen under lights and last the full 80 overs required in a test match.

Despite years of painstaking testing, players complained in the leadup that the ball was hard to see during the warmup matches under lights and also wore too quickly.

To that end, a grassy pitch was specially prepared at Adelaide Oval to cushion the ball from the usual wear and tear, an unusual development in Australia where curators prepare their pitches without fear or favour from authorities.

The outfield was also noticeably more lush, which slowed up shots that would normally have clattered into the fence.

After 11 centuries were scored in the opening two tests, the balance of power swung sharply to the bowlers in Adelaide.

In Perth, New Zealand's Ross Taylor hit 290 while the highest innings score was over 550.

Cricket Australia had to refund fans who bought tickets to day four of the test after it wrapped up in three.

Like ICC boss Richardson, New Zealand captain Brendon McCullum declared the match a success and day-night tests "here to stay", but also bemoaned the imbalance between bat and ball.

It was most pronounced at night when the pink ball swung its hardest and was tougher for batsmen to see under the lights.

McCullum's coach Mike Hesson said he felt more work was needed on the pink ball before further day-night tests could be scheduled. "I think there does need to be a little bit of tweaking but the actual concept is excellent," he told reporters in Adelaide on Monday. "You do struggle to see the seam at night, so I think there just needs to be a little bit of work around that. "I think we enjoyed the fact that the ball swung but it's just something we need to look at because it's a bit more of a haze than a normal ball." -Reuters