Supersized scanner to explore the body and hunt down disease 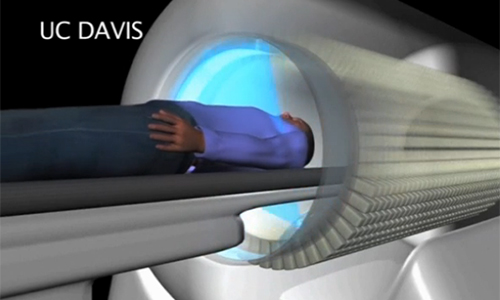 Supersized scanner to explore the body and hunt down disease

CALIFORNIA – When they were kids, Simon Cherry and Ramsey Badawi both wanted to be astronomers, unlocking mysteries in far off galaxies. That didn't work out for them. The pair still plan on unlocking mysteries but this time inside the human body. They've received a $15.5 million grant to build the world's first full body PET scanner. Unlike X-Rays and MRI's that image structure in the body. Positron emission tomography, or PET, images function on a molecular level. Simon Cherry, Professor of Biomedical Engineering, says: "We are able to say something about what the cells in the body are doing. How actively they are metabolizing, for example, or how quickly they are dividing. So taking cancer for example that could be tremendously powerful to see when you give a drug whether that shuts down the metabolism of a tumor." But what sets this new scanner apart is its size. Current PET scanners are only able to image parts of the body. This new device will be able to image the whole body in one go. Ramsey Badawi, Professor Radiology and Biomedical Engineering, UC DAVIS, says: "If you think about it really no organ in the body acts on it own. We are actually a system, a system of organs and all of the organs interact with each other. And we have never really been able to interrogate that with imaging before and now we are going to be able to look at that and that is tremendously exciting and it opens up a bunch of science that we really don't know where that is going to lead, actually." What it could lead to is better and safer drugs, as well as more targeted diagnostic treatment for diseases, thanks to the unprecedented blueprint of the body this scanner could potentially provide. Simon Cherry says: "So we are going to collect effectively more signal with this scanner than we do with current devices. And that lets us do a couple of things. We can either image much more quickly and collect our signal in 1/40th of the time so we can do scans in 30 seconds that currently take 30 minutes. Or we can drop the radiation dose significantly and do scans at a fraction of the radiation dose that we currently do them at." –Reuters