Surgical operation against terrorists along Punjab borders in the offing 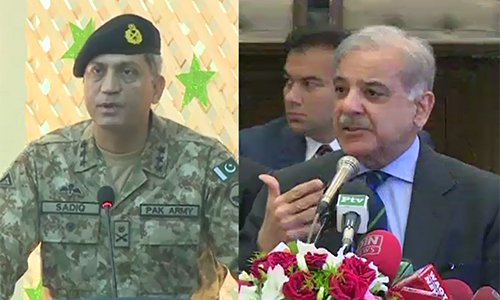 LAHORE (92 News) – All set for a surgical operation against terrorists along the Punjab borders.

This was decided during a meeting between Chief Minister Shahbaz Sharif and Corps Commander Lahore.

Initially the operation will be launched in Rajanpur, Taunsa and adjoining areas.

The provincial government, Rangers and sensitive agencies will jointly take part in the operation.

Incompetence of rulers can lead to major incident in country: Zardari

LAHORE (92 News) - Giving warning about grave danger, former president Asif Ali Zardari termed that the incompetence of clumsy rulers could lead to a major incident in the country.

KARACHI (92 News) - The rangers arrested four members of an extortion gang during a raid in Gulbahar area of Karachi on Sunday.

KARACHI (92 News) - Lashing out at the incumbent government, former finance minister Miftah Ismail has said that the PTI robbed Rs200 billion from the pockets of public by raising the power tariff by Rs1.95.

No one has courage to table no-confidence move against PM: Fawad

ISLAMABAD (92 News) - Federal Minister for Science and Technology Fawad Chaudhry has said that opposition parties don’t have any plan or strategy against the incumbent government.

Madinah acknowledged by WHO as among the world’s healthiest cities

GENEVA (92 News) - A unique honor for the city of blessings, the Saudi city of Madinah has been acknowledged by the World Health Organization (WHO) as among the world’s healthiest cities.