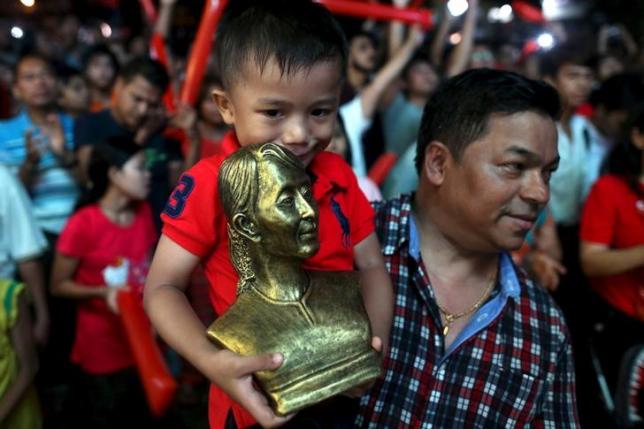 YANGON - Supporters of Myanmar's Aung San Suu Kyi were confident on Monday her party had won a landslide victory in the country's first free general election in 25 years, with the biggest question whether the margin was enough to claim the presidency. Suu Kyi's National League for Democracy (NLD) was expected to win the largest share of votes cast by an electorate of about 30 million who chose from thousands of candidates standing for parliament and regional assemblies. "We're leading the race but we can't say for sure we'll win two-thirds of the seats in Parliament that would enable us to form an independent government without forming a coalition," said NLD senior official and spokesman Han Tha Myint. Electoral authorities will declare rolling results throughout the day on Monday, although a clear picture of the nationwide outcome is not likely before Tuesday. The election was a landmark in the country's unfinished and unsteady journey to democracy from the military dictatorship that made it a pariah state for so long. It is also a moment that Nobel peace laureate Suu Kyi will relish after spending years under house arrest. Incomplete vote counts showed some of the most powerful politicians of the ruling Union Solidarity and Development Party (USDP) trailing, indicating a heavy loss for the party created by the former junta and led by retired military officers. The USDP's Shwe Mann, speaker of parliament, lost his bid for a seat, his son said in a Facebook post. Although ousted as leader of the USDP in August, Shwe Mann, formerly a top-ranking member of the junta, had been seen as a presidential contender. Whatever the result, Myanmar is heading into a period of uncertainty over how Suu Kyi and other ascendant parties negotiate sharing power with the still-dominant military. Suu Kyi started the contest with a sizeable handicap. The military-drafted constitution guarantees one-quarter of parliament's seats to unelected members of the armed forces. To hold a majority that would allow it to form a government and choose its own president, the NLD on its own or with allies must win more than two-thirds of contested seats. The USDP would need far fewer seats if it secured the backing of the military bloc in parliament. POWER BEHIND THE THRONE? Even if she gets the majority, Suu Kyi, who led the campaign for democracy, is barred from taking the presidency herself under the constitution written by the junta to preserve its power. But if she is able to form Myanmar's first democratically elected government since the early 1960s, Suu Kyi says she will be the power behind the new president regardless of a constitution she has derided as "very silly". Many voters doubt the military would accept an overwhelming NLD victory, but the country's commander-in-chief said on Sunday there would be no repeat of the last free vote in 1990, when Suu Kyi won but the army ignored the result. An inconclusive result could thrust some of the 91 parties contesting the election, including many representing Myanmar's myriad ethnic minorities, into a kingmaker role. Even if the NLD does win handsomely, the military will retain significant power. It is guaranteed key ministerial positions, the constitution gives it the right to take over the government under certain circumstances, and it also has a grip on the economy through holding companies. Myanmar has had little experience with elections, but voting was mostly smooth, with only isolated irregularities reported. U.S. Secretary of State John Kerry said on Sunday the poll was an important step forward, but added it was "far from perfect". Important impediments remain to a fully democratic civilian government, Kerry said in a statement, including the reservation of a large number of unelected seats for the military. The main concern about the election's fairness arose before the poll, when activists estimated that up to 4 million people, mostly citizens working abroad, would not be able to vote. Religious tension, fanned by Buddhist nationalists whose actions have intimidated Myanmar's Muslim minority, also marred the election campaign. Among those excluded from voting were around a million Rohingya Muslims who are effectively stateless in their own land. -Reuters