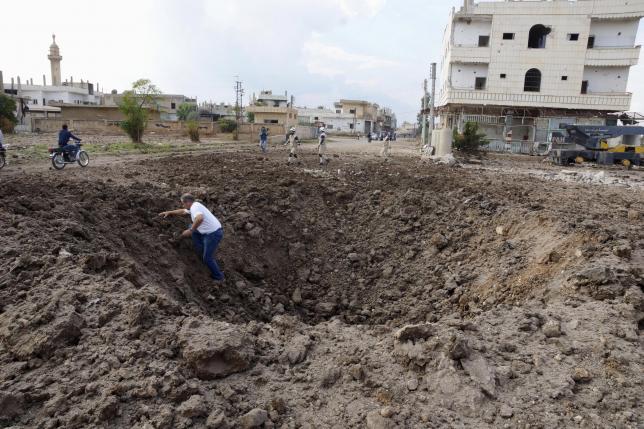 BEIRUT – Syrian soldiers fought their way into an airbase in northern Syria on Tuesday, state television said, breaking a nearly two-year siege by Islamic State insurgents at the facility and freeing military personnel holed up inside. A military source close to the government said the army was working to secure the Kweires airbase in Aleppo province, where soldiers and officers have been under attack since 2013. State television broadcast live footage from the airbase of an emotional, fatigue-clad reporter announcing the news, played victory songs and ran archive footage of military exercises. "We, the heroes of Kweires, are now celebrating with our brothers this victory," one of the freed soldiers told state TV, speaking by phone. "We dedicate this victory to President Bashar al-Assad and we promise him we will continue fighting until all of Syria is liberated. We will not kneel to Daesh," he said, using an Arabic name for Islamic State. The military source said hundreds of soldiers were freed. Britain-based monitoring group, the Syrian Observatory for Human Rights, also said that an advance party of troops had reached the airbase and "broken the siege". It is the most high-profile victory for Syria's army since Russia launched an air campaign in support of Assad on Sept. 30. Syrian troops have also been supported by Iranian forces and Lebanese Hezbollah fighters in a push to regain territory, largely in the north, lost to insurgents during almost five years of conflict. Rebels have frustrated a campaign to reclaim territory elsewhere in the country, where Russian jets have flown more than 1,600 sorties in little over a month. Dozens of soldiers were shown on television arriving at the airbase, elated and beaming, and it aired calls from the families of the freed soldiers. "We talked to him three hours ago, and he is in high spirits," the mother of Lieutenant Iyad Salameh said. Syrian Information Minister Omran al-Zoubi praised the "strength and steadfastness" of the soldiers, and sounded a defiant tone against "terrorists", the term which Syria's government uses to describe all rebels fighting against it. The breaking of the Kweires siege stood in stark contrast to Islamic State's capture of Tabqa airbase in Raqqa province in the north of the country last year, when militants killed scores of soldiers. The families of soldiers under siege in Kweires had staged protests urging the government to do more to take it back. –Reuters