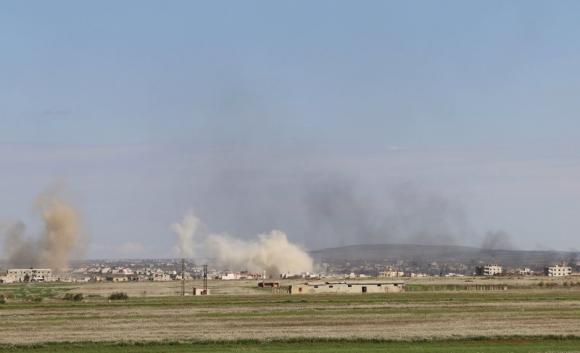 BEIRUT - Insurgent groups fighting the Syrian government have seized control of a southern town near the border with Jordan after four days of battles, the Syrian Observatory for Human rights reported on Wednesday. A Syrian military source said there had been heavy fighting with armed groups in and around the town of Bosra al-Sham on Tuesday night. "We are investigating the facts in the field," the source said. The ancient city of Bosra is listed as a UNESCO world heritage site. The Syrian army and allied forces including the Lebanese group Hezbollah launched a big offensive against rebel groups in Syria's southwestern corner early last month. It is an area of strategic importance due to its proximity to Damascus and neighboring states Israel and Jordan. Insurgent groups operating in the south include mainstream rebels who have received military support from President Bashar al-Assad's foreign foes and jihadist group the Nusra Front, which is al Qaeda's arm in Syria. The mainstream rebels say they have received more military support from Assad's foreign foes since the start of the offensive by Damascus. The Observatory said 21 insurgents had been killed in the four days of battles. The Syrian military on Monday said it had killed several insurgent leaders during the fighting. Bosra al-Sham is around 20 km (12 miles) north of the Jordanian border in the province of Deraa. Bosra's historic sites include an ancient citadel built around a 2nd century Roman amphitheatre. Bosra was once the capital of the Roman province of Arabia, according to the UNESCO website. - Reuters