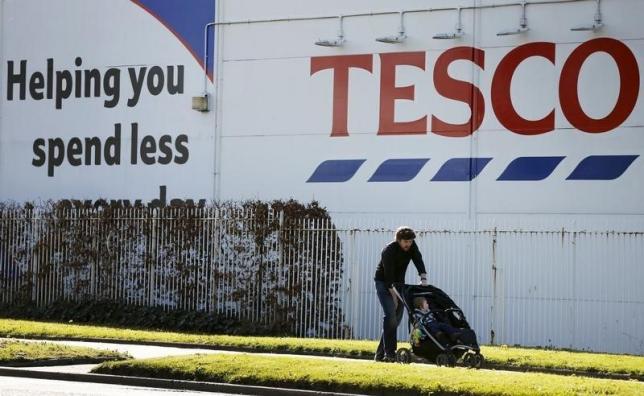 LONDON - Tesco is expected to say its recovery, though still in its early stages, is gaining momentum when the supermarket operator reports annual results next week. Sales, profit and asset values at Britain's biggest retailer have been hammered by changes to shopping habits and the rise of German discounters Aldi [ALDIEI.UL] and Lidl [LIDUK.UL], while an accounting scandal severely dented its reputation. Yet former Unilever (ULVR.L) executive Dave Lewis has impressed investors with his decisive actions since replacing sacked predecessor Phil Clarke as chief executive in September 2014, and the latest evidence of his efforts could be on show in next Wednesday's update. Lewis is trying to revive Tesco with a focus on lower prices, better customer service and new relationships with suppliers, the root cause of the accounting issues being investigated by Britain's Serious Fraud Office. Lewis, dubbed "Drastic Dave" for his radical overhaul of Unilever, has also sold assets including Tesco's South Korean business, slimmed down a bloated product range and cut costs, including thousands of jobs, to reduce debts. Tesco shares have gained 28 percent so far this year on recovery hopes and the group enjoyed its best Christmas trading performance for four years. Improving monthly UK industry data has followed. Analysts at Barclays, Tesco's in-house broker, forecast a 0.8 percent rise in fourth-quarter UK like-for-like sales, which would be the first positive quarter in more than three years. "While this is very welcome, the discounters continue to open stores and take market share, Asda seems to be sharpening its offer, and there will likely be cost pressure," the analysts said, noting factors including a rise in the government-mandated minimum pay rate dubbed the national living wage. Lewis has said he hopes to deliver an operating profit before one-off items for the year to Feb. 27 similar to the 940 million pounds made in the previous year. Analysts on average forecast 932 million. However, the fact that Tesco made a trading profit of 3.97 billion pounds in 2011-12 shows the extent of its profit collapse in recent years. Analysts expect profit growth in the 2016-17 year. The average forecast is for an underlying operating profit of 1.25 billion pounds. But in the meantime progress is difficult and no dividend is expected to be paid for the past year, or a timetable set out for its resumption. Results are due on April 13 at 0600 GMT. -Reuters