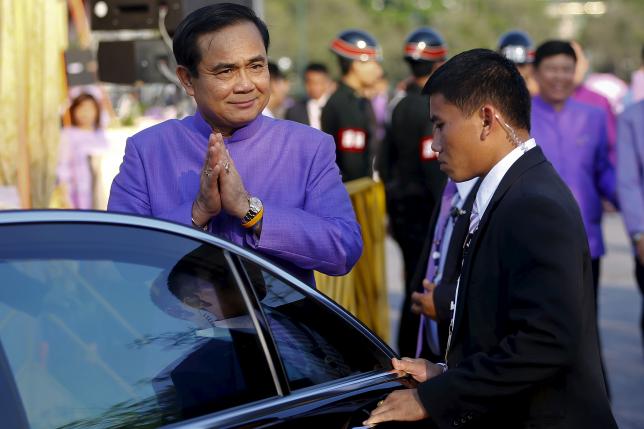 BANGKOK – (Reuters) - Thai junta chief Prayuth Chan-ocha defended a controversial security order two days after the junta lifted martial law and warned that he would not tolerate criticism of the Thai army, which retains sweeping powers under the new measures. The United Nations human rights chief has expressed alarm over the new measures, saying martial law had been replaced with something "even more draconian", and other critics say the new measures give Prayuth absolute power. Speaking at a military academy in Bangkok, Prayuth defended the measures introduced to replace martial law, saying they had been misunderstood by foreign media. He went on to issue a stern warning to critics of the armed forces or the state. "If anyone says anything that causes damage to the Royal Thai Army or to the country I will not stand for it," Prayuth said. "I am not scared." The ruling junta, known as the National Council for Peace and Order, lifted martial law late on Wednesday and in its place invoked Section 44 of the interim constitution. The special security measures will continue to outlaw political gatherings and will allow authorities to censor the media. Those who take part in political gatherings of more than five people can be sentenced to up to six months in prison. Thailand's army chief General Udomdej Sitabutr said on Thursday that the new security measure does not give the army more control than it had under martial law. But that has not stopped mounting criticism. The Thai-language newspaper Thai Rath, which has close ties to the army, published a cartoon on Thursday that shows people holding anti-junta signs and junta chief Prayuth with another sign that says: "Good people are not scared of Article 44." One sign in the cartoon held by a demonstrator reads: "Protest against those who delay elections." The junta has pushed back a general election promised for 2015 to 2016. Martial law was declared shortly before the military seized power on May 22 last year, following months of protests that destabilised the elected government of former Prime Minister Yingluck Shinawatra. The army said martial law was necessary to maintain order. Thailand's tourism industry suffered from months of protests in 2013/14 and from the May coup that followed. Many tourists were unable to get travel insurance while martial law was in place. Prayuth said the new security measures would not deter visitors. –Reuters