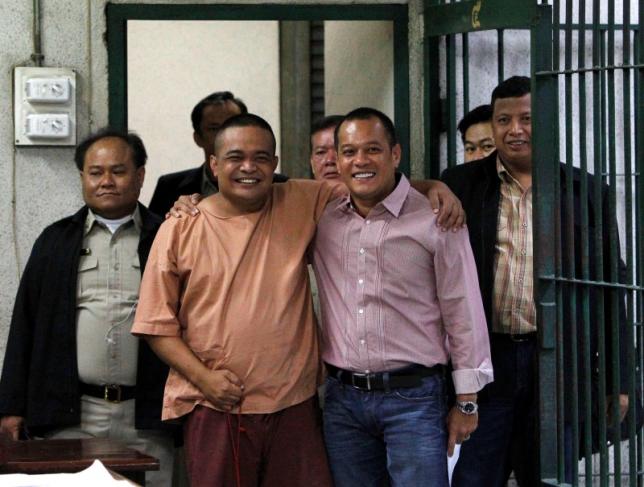 BANGKOK - Thailand's army detained two leaders of an opposition group on Monday who were planning to visit a public park dedicated to the monarchy that has been at the centre of a corruption scandal involving the military government.

The allegations relating to the financing of the Rachabhakti Park, built on army property in the seaside town of Hua Hin, are threatening to damage an anti-graft drive by the junta, which seized power last year.

Nattawut Saikua and Jatuporn Prompan, leaders of the United Front for Democracy Against Dictatorship (UDD), also known as the "red shirt" group, were taken away by the army before they could set off for the park.

"They wanted to see how the park was operating and to see the place where the military allegedly abused funds, but also to pay respects to past kings," Thanawut Wichaidit, a spokesman for the UDD, said.

"This is a violation of our right to pay respects."

Colonel Winthai Suvaree, a spokesman for the junta, or National Council for Peace and Order, confirmed the men's detention and said their actions were a "clear example of a political movement".

The junta has banned political gatherings of more than five people and has summoned hundreds of activists for questioning since taking power.

Many, including politicians and journalists, have been forced to attend attitude adjustment sessions at military facilities.

Winthai urged the public to follow news about the park graft investigation through official channels.

The accusations of kickbacks, levelled by some Thai media and opposition groups, have transfixed a country anxious over the declining health of King Bhumibol Adulyadej, 87.

Nattawut and Jatuporn were taken to a military camp in Kanchanaburi, 111 km (69 miles) west of Bangkok.

Four military vehicles and plainclothes military officers went to his house on Sunday, Nattawut wrote on his Facebook page. "Let it be known that seeking truth is dangerous," he said.

But the junta said it won't allow the opposition to play politics over the park which features giant statutes of former Thai kings. "If they hope to go there to start a political issue, the army is not going to play that game," Defense Minister General Prawit Wongsuwan told reporters on Monday. "Honestly, they should not go." -Reuters