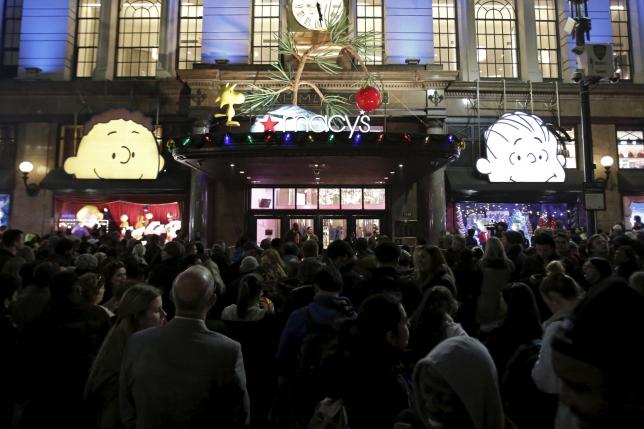 PITTSBURGH/CHICAGO - Retailers across the United States offered early Black Friday discounts to lure bargain-hunters on Thanksgiving eve, but initial checks showed crowds in brick-and-mortar stores were subdued even as online sales jumped. "It's still early, and from what we are seeing so far the crowds are good but not great," said Craig Johnson, president of Customer Growth Partners. The retail consultancy has 18 members studying customer traffic in different parts of the country. However, many stores were packed. At the Toys R Us in New York's Times Square, a line of about 200 shoppers, hemmed in by barricades, stretched to the corner of 45th Street and toward Sixth Avenue, where the Macy's Inc (M.N) Thanksgiving Day parade had ended a few hours earlier. The first shoppers through the door cheered as they were greeted by store employees donning Santa hats. The rush on the night of the U.S. holiday, a month before Christmas, reflects the new normal in U.S. holiday shopping, which was traditionally kicked off the next day, Black Friday. In an effort to attract the most eager holiday shoppers and fend off competition from Amazon.com Inc (AMZN.O), U.S. retailers have increasingly extended their holiday deals by opening stores on the evening of Thanksgiving. This hurt customer turnout on Black Friday last year, a trend analysts and consultants expect will repeat this year. "I can wait until tomorrow but it's more exciting today," said Daipayan Deb, a shopper in his mid-thirties at a packed Wal-Mart super center on the outskirts of Pittsburgh. "Previously, I used to start shopping on Black Friday, but now it's Thursday." Early discounts at stores and online included buy one get 50 percent off on the second "Star Wars" toys at Target Corp (TGT.N), $200 off quadcopter drones at Best Buy Co Inc (BBY.N), and a 50-inch Samsung smart TV for $499 at Wal-Mart Stores Inc (WMT.N). Shoppers in the United States spent more than $1 billion online, 22-percent more than last year, between midnight and 5 pm ET on Thursday, according to the Adobe Digital Index, which tracked 100 million visits to 4,500 U.S. retail sites. Target's Chief Executive Brian Cornell said online sales at the discount retailer were off to a "very strong" start. Early anecdotal evidence showed stronger customer traffic and more shoppers in stores than last year but it was still too early to comment on the overall trend. "We will know a lot more after the evening," he said on a media conference call. As much as 20 percent of holiday shopping is expected to be done over the Thanksgiving weekend this year, analysts said. The four-day shopping burst will help set the tone for the rest of the season, signaling to retailers whether they need to drop prices or change promotions. Kimberley Turner, a mother in her forties who was shopping with her young son said she found the discounts less compelling. "I actually think the deals were better last year," she said. Online discounts averaging 23 percent are below last year's 25 percent, but prices are expected to drop as more Black Friday sales come on board, said Tamara Gaffney, principal research analyst at Adobe Digital Index. The shopping season spanning November and December is crucial for many retailers because the two months can account for anywhere from 20 to 40 percent of their annual sales. Shoppers are expected to be cautious with their spending again this year. The National Retail Federation is expecting holiday sales to rise 3.7 percent, slower than last year's 4.1 percent growth rate, due to stagnant wages and sluggish job growth. -Reuters