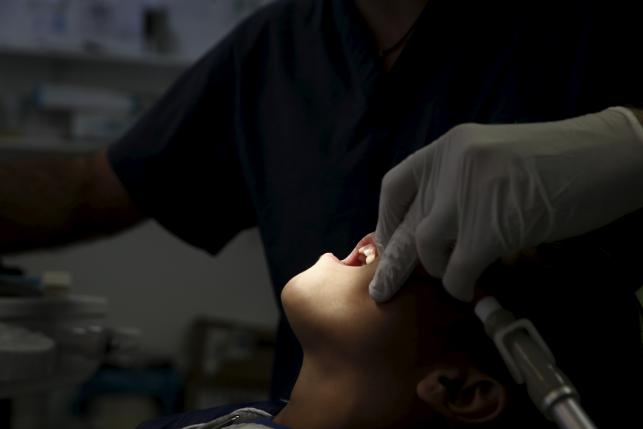 ATHENS – It was the first time in weeks Anthoula Papazoi had cooked meat. She had stewed the cut of beef, donated by a friend, on a low flame all morning. But now the casserole sat untouched, as Papazoi fretted about her 13-year-old daughter Nikoleta's tooth. The teenager – long black hair, electric-blue nail polish – emerged from the bedroom in shorts and a tank top. She had slept most of the day and was late for an appointment for a long overdue root canal procedure on a bottom front tooth. "Do we have painkillers?" she asked, rummaging through a kitchen cabinet. "I'm going crazy." "No, we don't. Go get ready for the dentist," Papazoi said. "Do we have milk?" Nikoleta asked. She pulled at a piece of masking tape that held closed the refrigerator door, reached in and grabbed a carton of milk. In a tall white mug she mixed the milk with chocolate powder and five spoonfuls of sugar, and then slumped into a chair. "Get up and go," her mother ordered. In few places are the wounds of Greece's economic depression more evident than in the mouths of the nation's children. By most indicators of dental health, Greece is one of the unhealthiest places in Europe. The number of Greeks 16 years or older reporting unmet dental care needs was 10.6 percent in 2013, according to Europe's statistical agency Eurostat. That compares to a European Union average of 7.9 percent. Dental problems are particularly acute among children, according to a recent survey by the Hellenic Dental Federation, a supervisory body. And the financial crisis has made things worse. In the decade up to 2014, 60 percent of all dental problems in 15-year-olds were left untreated for at least a year, up from 44 percent in the previous decade. Almost all the five-year-olds surveyed – 86.8 percent – suffered dental problems that had not been treated, the survey found. "Teeth are unfortunately considered a luxury," said Niki Diamanti, a dentist who works at Hatzikosta Hospital, one of two public hospitals in the northwestern town of Ioannina. "If, five years ago, people went to the dentist once a year, now they go every five years." In Greece's case, the situation is remarkable because the dental problems are not primarily caused by changes in daily oral hygiene, experts say. Rather, children are developing tooth diseases for reasons related to the country's six-year economic depression. First, money woes have led to fewer dentist visits. Disposable incomes in Greece have shrunk by about 30 percent since 2009. More than 1.2 million Greeks – one in four working-age people – are unemployed. Forty percent of children live in poverty, according to the U.N children's agency UNICEF, more than in places such as Chile, Turkey and Mexico. As well, the publicly funded system of free or low-cost medical care that millions of Greeks relied on for decades has shrunk, largely because of public spending cuts demanded in exchange for the 326 billion euros ($354 billion) in financial aid Greece has received since 2010. Per capita health spending fell 9 percent a year between 2009 and 2012. The result: More than 8 percent of Greeks skipped dentist visits in 2013 because it was too expensive, well above the 5.1 percent European average, according to Eurostat. The financial crisis has also driven a surge in the consumption of cheap, high-sugar foods, dentists say. After dipping for a couple of years, sales of sugary snacks at supermarkets picked up again in 2013, according to Euromonitor, a consumer goods research group. Greece's bad teeth may be storing up problems for the future. Studies around the world have identified links between bad oral health and chronic illnesses such as cardiovascular diseases, the world's number one killer. Severe gum disease is associated with diabetes and coronary artery disease, according to several medical studies. Scientists are still debating whether dental problems cause other health conditions, or are merely associated with them. Doctors and scientists have long associated dental health with economic development, largely because good teeth are correlated with access to education. Pain from dental diseases keeps children in many developing countries from their studies, according to the World Health Organization. Paula Vassallo, chair of a European lobby group that promotes oral health, said children suffering tooth pain often sleep and eat poorly, which can hurt how well they do at school. Children with tooth pain can suffer malnutrition and low levels of vitamin D, she said. "If you're in pain like that you can't sleep, you can't eat well, you can't speak, you can't perform," says Vassallo, whose Platform for Better Oral Health in Europe receives funding from dental care firms. "The effect on Greece is going to be huge, not just in terms of the economic impact, but also the health, quality of life and employability of people." In the Papazoi family, it's not only Nikoleta who has suffered. Anthoula Papazoi's eldest daughter, Elli, 16, was rushed to hospital last year because of pain from a pus-filled tooth, only to be turned away because there was no dentist on call. Papazoi's eldest child, Christoforos, 17, had a tooth filled recently. And Anastasis, 5, barely avoided a root canal earlier this year. Papazoi, who runs a small business hiring out cleaners and nurses, stopped contributing to social security three years ago when she could no longer afford to. That meant the 44-year-old joined an estimated 2.5 million Greeks without access to public health care. She now owes 900 euros to four different dentists. The family's struggles can be seen in the contents of their fridge. Five years ago, it was stocked with cheese, meat and vegetables. Today: celery, a bit of shredded pumpkin and home-churned butter Papazoi's parents send from their village. The family diet is high in carbohydrates and sugar. Most days they eat rice, pasta, or occasionally lentils. "I always used to buy fruit but now you can't buy fruit. It's too expensive," said Papazoi. "I'd never imagine I'd reach this point: running around from day to night and not even being able to provide the basics for my children." –Reuters