Thieves have joined hands against the PTI, says Imran Khan 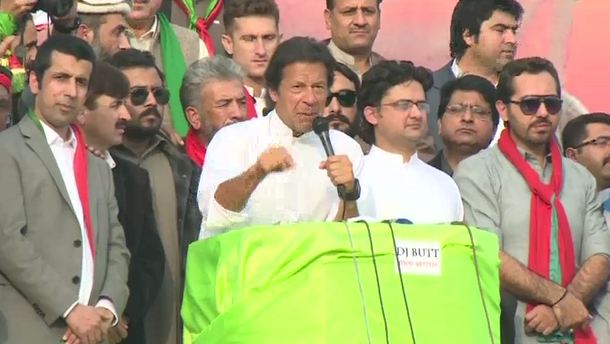 Thieves have joined hands against the PTI, says Imran Khan

SWABI (92 News) – Awami Jamhoori Ittehad (AJI) chairman Shahram Tarkai has on Sunday officially merged his party in Pakistan Tehreek-e-Insaf (PTI). Addressing a rally regarding AJIP’s merging in PTI in Swabi’s Tarkai, the PTI chairman welcomed the AJIP in PTI, adding that his party will make next government in Khyber Pakhtunkhwa. Imran Khan said that first independent Accountability Commission has been constituted in Khyber Pakhtunkhwa. “Thieves and robbers have joined hands against the PTI but now the people will have to gather against these thieves and robbers,” Khan said. The PTI chairman said that people are his party’s top priority, adding that we will construct roads afterwards. “The provincial government has made the police free and neutral and now the police system has changed, he said. “We decided to rehabilitate the Police to begin with, because Police can bring peace and stability. Stability brings investment and business,” he added. “The province’s hospital will be among country’s top hospitals after after the PTI government’s five-year tensure, adding that the attendance of teachers in schools has improved from 50 to 100 percent in the province,” PTI chairman said. The PTI chairman further stated that their local body system is much better than of Punjab and Sindh. “We will give the funds at the grass root level, no matter which party the chairman belongs to,” he claimed.