Those rigging elections will have to pay the price: Nawaz Sharif


MANDI BAHAUDDIN (92 News) – Former prime minister Nawaz Sharif has said that those rigging the elections will have to pay the price.

Addressing the workers’ convention on Friday, he said that a few people have been changing the destiny of the masses and now they will not let it happen.

“People will have to support me to restore the sanctity of the vote. No one will be allowed to rig the elections,” he said.

The former prime minister said that his enemies want to see him in jail. “I will not leave the people even in jail. My voice will continue to reach the people,” he added.

PML-N leader Maryam Nawaz has said that the PML-N will win the general elections. 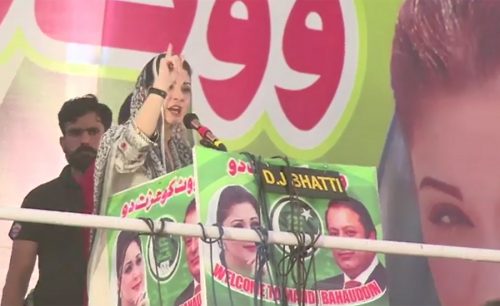 She said that the drama of ‘Iqama’ was staged which will not affect Nawaz Sharif. “Is it not injustice to oust a prime minister for not getting a salary from his son?”

She claimed that Nawaz Sharif eliminated terrorism and loadshedding. “Pervez Musharraf is being asked to come and contest the elections,” she said.

The PML-N leader said that there will be referendum on July 25.