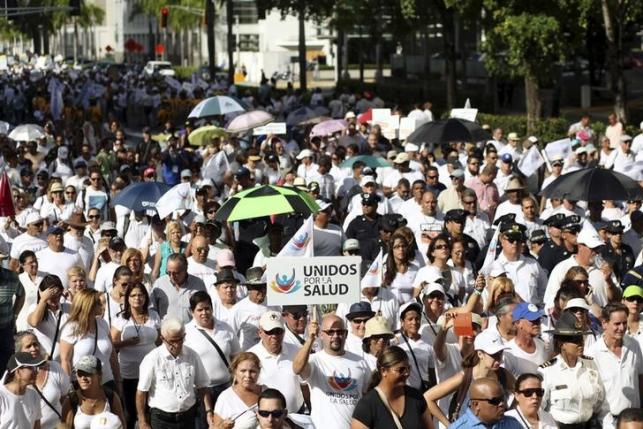 SAN JUAN – Tens of thousands of Puerto Ricans, including hospital workers wearing scrubs, rallied in San Juan on Thursday to press Washington to improve healthcare benefits for the indebted U.S. territory which is in the middle of a fiscal crisis. Puerto Rico, saddled with $72 billion in debt and a 45 percent poverty rate, defaulted on part of its debt in August. It receives less federal healthcare support than U.S. states and faces the impending dissipation in 2017 of a federal block grant, which could further squeeze Medicaid services. "At this precise moment, there are people all over the island ... who are enduring physical pain," said Reverand Eunice Santana Melecio, director of the Caribbean Institute for Ecumenical Action and Formation. The sheer number of marchers, estimated in the tens of thousands by the governor's office, shut down a major San Juan thoroughfare. Ranging from public servants to athletes, some held signs with demands like "funds for healthcare, not insurance companies." The rally was attended by New York City Mayor Bill de Blasio and New York Governor Andrew Cuomo. New York is home to the greatest number of Puerto Ricans outside the island with 1.1 million. "What's happening is unfair to the people of Puerto Rico. 3.5 million of our fellow Americans are being left out in the cold when it comes to healthcare," said de Blasio. Cuomo announced plans for a summit in the coming weeks to strategize ways to press Washington to address Puerto Rico's health and fiscal crisis. The U.S. Treasury, warning of a budding humanitarian crisis on the island, has called on the U.S. Congress to improve healthcare funding for Puerto Rico. As a U.S. commonwealth, Puerto Rico pays the same Medicare taxes as states while receiving 40 percent less in reimbursement, and about 70 percent less in Medicaid, according to figures provided by nonprofit Puerto Rico Healthcare Crisis Coalition, an organizer of the event. The rally was backed by religious leaders, Governor Alejandro Garcia Padilla, labor unions and education leaders. The low reimbursement rates are leading many local physicians to emigrate to the U.S. mainland, or refuse to accept Medicare and Medicaid. In a call with reporters on Wednesday, Dr. Jose Carlo-Izquierdo, a neurologist and former chancellor of the University of Puerto Rico's medical sciences campus, said Puerto Rico faces "a Katrina-like situation," recalling one girl who, diagnosed with an operable tumor, lost her vision due in part to long wait times for surgery. –Reuters