GHOTKI (92 News) – Three people killed and 10 others were injured when a passenger bus flipped due to over-speeding at Sukkur Motorway near Ghotki on Tuesday.

According to the reports, two women and a minor girl died and ten other passengers were wounded when a passenger bus turned turtle due to over speeding and bus immediately caught fire after the accident.

The ill-fated bus, with 45 passengers, was going to Karachi from Bannu. The incident occurred as the driver fell asleep during driving and lost his control over the bus.

Police and rescue teams reached the spot and shifted the dead and injured to a nearby medical facility.

Meanwhile, in another speeding dumper rammed into coaster in Arifwala and killed nine passengers. The rescue teams have shifted the victims to nearby hospital for medical assistance. 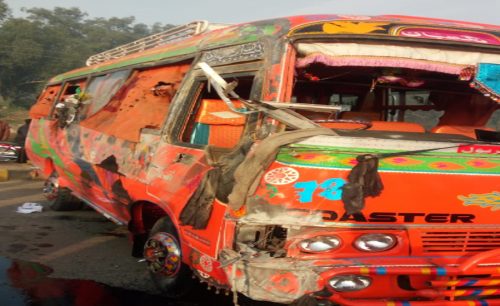 On the other hand, Mazda crushed passenger van and motorcycle and left six dead and several people injured in Muzaffargarh.