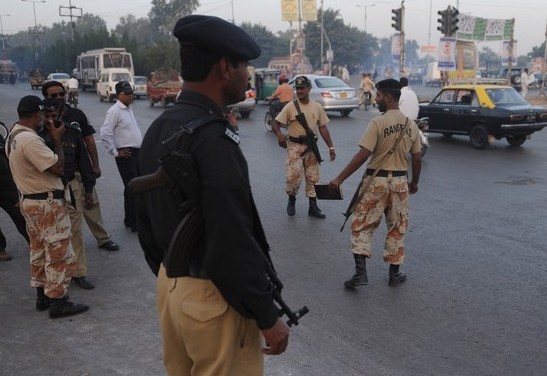 KARACHI (92 News) – At least three terrorists were killed, while 27 others including two target killers were arrested in different incidents in Karachi on Thursday.

As per details, Sindh Rangers carried out an intelligence-based operation in Lyari’s Gul Muhammad Din, where terrorists hiding in house opened firing, injuring a Rangers personnel, in retaliation three terrorists were killed on the spot.

In another incident, police have detained at least two target killers namely Shahid and Ali during a raid conducted in Rizvia Colony. “The target killers confessed to killing 12 people and firing at a bus,” police said.

Meanwhile, at least 25 suspects were apprehended during a joint search operation conducted by the police and Rangers.

Authorities decides to auction Nawaz's Sheikhupura properties on May 20

ISLAMABAD (92 News) - The authorities on Tuesday has decided to auction the confiscated Sheikhupura properties of former premier Nawaz Sharif on May 20.

KARACHI (92 News) – Pakistan Peoples' Party (PPP) Bilawal Bhutto on Tuesday said that the annual rate of inflation in the country has reached 15 per cent.

ISLAMABAD (92 News) - Pakistan and Turkey have strongly condemned the Israeli aggression against unarmed Palestinians and their forced eviction from their homes.

ISLAMABAD (92 News) - The federal government has decided to send medical aid to Palestinians on Tuesday.

NEW YORK (92 News) - Pakistan has called on the Non-Aligned Movement (NAM) to demand an immediate end to Israel’s deadly offensive in Palestine.

ISLAMABAD (92 News) – The PML-N has accused the government for shielding the real culprits in Rawalpindi Ring Road corruption case on Tuesday.