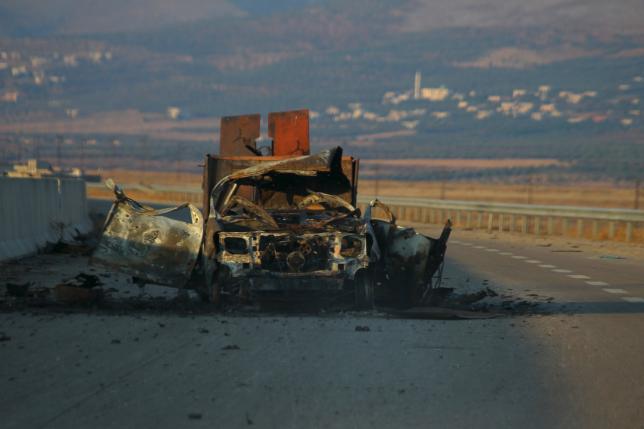 BEIRUT -  A Syrian military source said on Tuesday the army had retreated to new defensive lines in a region of vital strategic importance to President Bashar al-Assad, seeking to avoid losses at the hands of advancing rebels. The insurgent advance into the Sahl al-Ghab plain in northwestern Syria has brought rebels including the al Qaeda-linked Nusra Front to the eastern edge of mountains that form the historical heartland of Assad's Alawite people. The rapid advance so close to an area of such importance to Assad underscores the difficulties facing the army and the manner in which Syria is splintering: Assad said last month the army faced a manpower shortage and had given up some areas in order to defend others of greater significance. The rebels, well supplied and attacking in large numbers, had seized high ground in Sahl al-Ghab in an attack that began some two weeks ago, increasing the risk posed by rebel artillery and guided anti-tank missiles, the military source said. "The army - to avoid losses and to avoid exposure to artillery and missiles from these areas - has taken up a second defensive line ... It has strengthened its positions in this second defensive line," the source said. "At the end of the day, it is giving up positions in the interest of strengthening and fortifying a fixed defense line." "No army in the world wants to retreat, but it is not worrying. We can recover these positions and we have previously recovered them." The insurgents have advanced into Sahl al-Ghab from areas of the northwest seized from government control earlier this year during a series of setbacks that also saw Assad lose parts of the south and central Syria to an array of armed groups. The Syrian Observatory for Human Rights, a UK-based group that tracks the war, estimates the amount of territory now held by Assad at a quarter of Syria. The government-held area includes cities where the bulk of the population still live. Assad, in a July 26 speech in Damascus, said the army could not fight everywhere at once for risk of losing vital ground, in a candid assessment of the strains of more than four years of war estimated to have killed a quarter of a million people. Support from Iran and the Lebanese Shi'ite group Hezbollah has been crucial to Assad through the war. Hezbollah, which is Iranian-backed, has deployed its highly trained guerrillas alongside the army and pro-government militia. DIFFICULT BATTLE EXPECTED Sahl al-Ghab is a fertile plain about 60 km (40 miles) long located to the east of the coastal mountains, where Assad's ancestral village of Qardaha is located. Insurgents say government forces have now fallen back to Joreen, an Alawite village and where the army has a base. "The progress was - praise be to God - fast," said Abu al-Baraa al-Hamawi, a leader in the Ajnad al-Sham insurgent group that is fighting in Sahl al-Ghab as part of an alliance known as the "Army of Fatah", a reference to the conquests of the early Islamic empire. "As for the coming battle, we expect it will be more difficult because it will be in the stronghold of the regime," he added, speaking via internet from the Sahl al-Ghab area. The sound of warplanes could be heard in the background. It is not the first time insurgents have come close to the Alawite heartland areas: in 2013, Islamist rebels including al Qaeda-linked groups captured around a half dozen Alawite villages on the northern edges of the mountain range. The army later repelled them. The military source described the insurgent force as large, and well supported by foreign backers - a reference to Turkey and other states hostile to Assad. The source confirmed a report in the pro-government al-Watan newspaper on Tuesday saying that the army had redeployed to defensive positions in Sahl al-Ghab to "prevent the armed groups from realizing their goals ... in the Joreen area". The Observatory estimates the insurgents now control at least 40 percent of Sahl al-Ghab. Abu Yusef al-Muhajer, a rebel in the Ahrar al-Sham group, said control of Sahl al-Ghab would cut a supply route from the coastal city of Latakia to the city of Hama. The Syrian military has launched heavy air strikes in areas in a bid to drive back the rebels. But these have proven less effective than before, said Rami Abdulrahman, who runs the Observatory. He said the advance was further proof of the effectiveness of guided anti-tank (TOW) missiles which he said the rebels had received in large quantities since March. Diplomats say the missiles have been delivered via Turkish territory. "The TOW had a primary role, along with the foreign fighters," he said, a reference to jihadists he said had joined the battle in large numbers. - REUTERS