LAHORE (92 News) – Traders observed almost complete shutter-down in all major parts of the country against imposition of multiple taxes, rising inflation and economic policies in the federal budget 2019.

The complete to partial strike is being observed in big cities like Peshawar, Quetta, Karachi, Rawalpindi, Lahore, Islamabad, Faisalabad, Multan, Hyderabad, Noshehra and other cities.

However, businesses were partially open in Karachi after Karachi Tajir Action Committee (KTAC) rejected the strike call announced by All Pakistan Anjuman-e-Tajiran (APAT).

All commercial centers, markets and shops remained close in major cities and customers and buyers are finding it difficult to buy goods.

There would be no strike in Sanghar, he said, adding there is no justification of strike when the government has accepted 10 of 11 demands.

However, Naeem Mir of APAT has already challenged the opponents to show the notification of acceptance of demands. 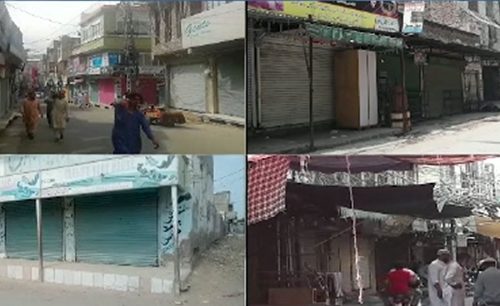 In Hyderdabad, markets and shops are closed on the call of APAT.

In Punjab, traders are observing complete shutter-down in all major and small cities except Mianwali, the hometown of Prime Minister Imran Khan.

Markets and industrial units remained close in Multan and Bahawalpur where traders demanded to abolish condition of CNIC for sale and purchase.

In Balochistan, citizens faced difficulties after traders got their shops closed in Gwadar and Quetta.

Carrying placards and banners, the protesting traders alleged the government is committing economic slaughter of business community by indulging them in gimmicks of tax filer and non-tax filer.