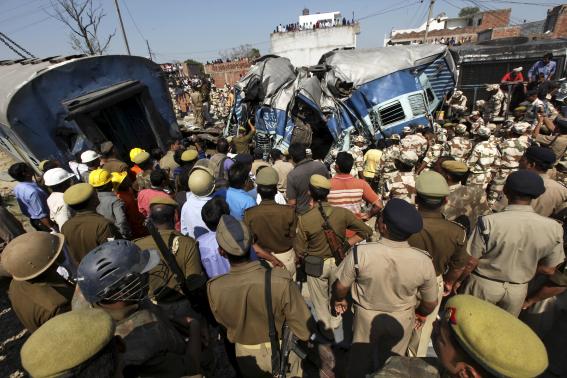 BACHHRAWAN – At least 30 people were killed and 50 injured when an express train overshot a railway signal and some carriages went off the rails in Uttar Pradesh on Friday, officials said. India's creaking railway system is the world's fourth largest, ferrying more than 20 million people each day, but it has a poor safety record, with thousands of people dying in accidents every year. Friday’s accident occurred at Bachhrawan railway station, about 45 km (28 miles) from Lucknow, the capital of Uttar Pradesh, one of India's most populous states. "Dead bodies after dead bodies were being pulled out," said Gyaneshwari, a 43-year-old passenger, who uses only one name. "The injured were crying in pain. God has been very unkind." Rescue workers used cutting machines to free passengers and recover the dead bodies, a witness said. Blood was splattered in and around the wreckage. The accident happened when the train driver "overshot the signal ... causing derailment of the tail engine and two coaches," Railway Minister Suresh Prabhu told parliament. There would be an inquiry into the accident, he added, with compensation to be paid to the victims. More than 400 passengers and 85 employees were aboard the train at the time of the accident, a railway official in the capital said. Successive governments have shied away from modernization of the railways, preferring instead to use the system to provide cheap transport and create jobs. Prabhu in February vowed to improve safety by bringing in more investments. Last month he unveiled plans to invest $137 billion in the decrepit network over the next five years, largely by raising funds from fresh borrowing and "monetizing" the railways' assets. –Reuters