Transfer of power at grassroots level priority of our reform agenda: PM

Detailed presentations were made and threadbare discussions followed during the meeting on the local bodies system which was introduced in Khyber Pakhtunkhwa by the PTI government for empowering people at the grassroots level and the proposed system to be replicated in other provinces.

The prime minister, in his remarks, said that the transfer of power at grassroots level and empowering people in a real sense is the priority of party’s reform agenda.

He said that the past practice of centralization of power into few hands and at times into one individual had not only deprived the people of any meaningful say in the government’s affairs but had also stripped the people of their right to have adequate resources for their development.

The prime minister constituted a high-level committee for holding in depth discussions and formulating a proposed structure of the local bodies within one week.

The recommendations of the committee would then be scrutinized and presented before the assemblies of the respective provinces for their consideration. The process of finalizing recommendations for initiating legislation process should be completed within one month, directed the prime minister. 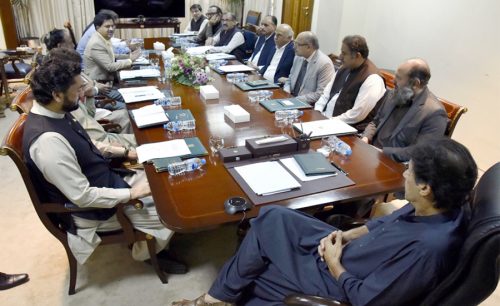 Meanwhile, Prime Minister Imran Khan chaired a high-level meeting on the issue of security and facilitation of the devotees at the Prime Minister’s Office.

Addressing the meeting, the prime minister observed that the security of the devotees, visiting holy places abroad, is a foremost priority and no effort should be spared in providing foolproof security and ensuring proper their facilitation.

The prime minister directed that a comprehensive action plan should be chalked out, in consultation with all stakeholders, within 48 hours for the security of the devotees visiting Iran, Iraq and other holy places during the coming month of Moharram.

The prime minister directed that immigration counters at Pak-Iran border should be enhanced to facilitate Zaireen in speedy immigration process.

He further directed that a permanent mechanism should also be evolved to streamline the entire operations of devotees for the future. In this context, the prime minister directed Minister of State Shehryar Afridi to coordinate with Chief Minister Balochistan and other stakeholders including the security forces and Ministry of Religious Affairs, to streamlining the process and ensure provision of maximum facilitation to the visiting devotees. He directed that a comprehensive time bound action plan with delineated responsibilities may be submitted for his approval to regulate the matter.