SIALKOT/GUJRANWALA (92 News) – Moving scenes were witnessed when bodies of 15 victims of the Turbat tragedy reached their homes on Thursday.

All the victims were laid to rest after their funeral in Sialkot, Daska, Gujranwala and Phalia. 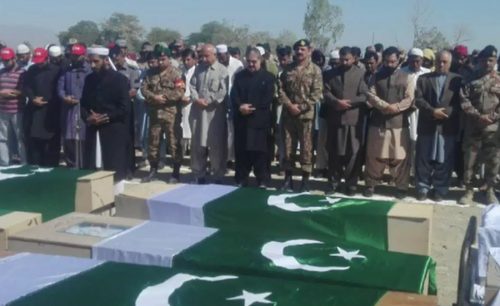 Earlier, funeral of 15 people shot dead by terrorists in Boelda area was held in Turbat.

The bodies were dispatched to Lahore by a special military plane C-130. The autopsy on the bodies was conducted in a hospital.

The 15 bullet-riddled bodies were recovered a day earlier. The identities of four out of the 15 deceased could not be ascertained. The deceased were trying to illegally cross the border into Iran to enter Europe.

Meanwhile, Chief Minister Shahbaz Sharif has constituted an 11-member committee to make arrangements for the bodies to be sent to their native areas.

The committee headed by Punjab Education Minister Rana Mashhood will also make recommendations to avoid such incidents from taking palace in future.