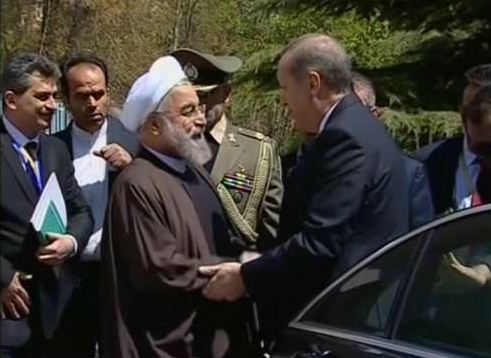 ISTANBUL/BEIRUT - Turkish President Tayyip Erdogan and Iranian counterpart Hassan Rouhani agreed to boost trade and signed a slew of deals at a meeting on Tuesday, but steered clear of directly addressing differences over conflict-ridden Yemen. Erdogan paid a one-day visit to Iran at a time when relations between Ankara and Tehran -- already strained by disagreements over Syria -- have been battered by events in Yemen, where they have backed opposing combatants. Erdogan has accused Iran of trying to dominate the region. Some Iranian lawmakers had called for Tehran to cancel his visit, with one politician saying the Turkish president wanted to rebuild the Ottoman Empire. But analysts have said that the friction between the neighbours will be kept in check by economic dependency. Turkey needs Iranian gas and sanctions-hit Tehran desperately needs export markets. Speaking at a joint news conference broadcast on Turkish television, both Erdogan and Rouhani sought to play down the regional tension, without making any concrete suggestions. "I don't look at the sect. It does not concern me whether Shi'a or Sunni, what concerns me is Muslims," Erdogan said. "We have to put an end to this bloodshed, this death." Erdogan, a devout Sunni Muslim has backed a Saudi-led military campaign against Houthi insurgents in Yemen. Tehran supports the Shi'ite Houthis. "We both believed that it is necessary for us to witness the end of war and bloodletting inYemen as soon as possible," Rouhani said. The two presidents signed eight agreements and took pains to emphasise the need for greater economic cooperation, with Erdogan saying they were far behind a target to lift trade volume to $30 billion, from $14 billion last year. Trade between Ankara and Tehran has also been hampered by a dispute over the price of natural gas. Turkey, which imports 10 billion cubic meters of Iranian gas a year, took Iran to the International Chamber of Commerce in Switzerland in 2012 after Tehran rejected a complaint that the price was too high. At Tuesday's press conference, Erdogan said Turkey would buy more natural gas fromIran if it were cheaper. He also said Turkey and Iran should start trading in their own currencies instead of dollars or euros to avoid foreign exchange volatility. - Reuters