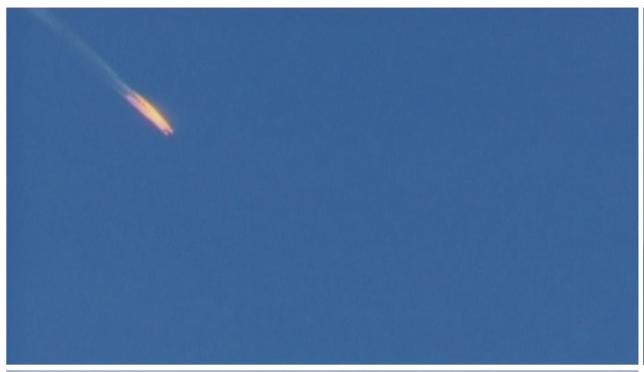 ANKARA/MOSCOW - Turkey recovered the body of a Russian pilot from northern Syria and presented it to Russian diplomats on Sunday, five days after shooting down his warplane in an incident that wrecked relations between two of the main powers involved in Syria's war.

A coffin carrying Oleg Peshkov arrived by ambulance on the tarmac of Hatay Airport in southern Turkey near the Syrian border, a Reuters photographer said.

It was flown to the capital Ankara, where according to Russia's RIA news agency it was met at an airfield by Moscow's ambassador and military attache. The Russian embassy declined to comment.

The shooting down of the Russian fighter jet by NATO-member Turkey, the first known incident of its kind since the Cold War, has damaged efforts to forge a united front against Islamic State in the weeks since militants claimed responsibility for mass killings in Paris and blowing up a Russian airliner.

Moscow has responded towards Ankara with fury, calling the episode a pre-planned provocation. President Vladimir Putin signed a decree on Saturday imposing punitive economic sanctions against Turkey. Details of Turkish goods that will be banned and other measures under the decree are expected to be announced in coming days.

Turkey says Peshkov's plane was in its air space and had ignored repeated warnings when it was shot down. Russia says it was flying over Syria and was struck unprovoked.

The navigator of the two-seat jet survived but another Russian service member was killed rescuing him from northern Syria.

Turkish Prime Minister Ahmet Davutgolu said on Sunday that Peshkov's body had arrived in Turkey overnight, but gave no further details of how it was recovered or brought across the border.

Turkey is part of a coalition of countries led by the United States that have been bombing Islamic State positions in both Syria and Iraq, while also calling for Syrian president Bashar al-Assad to step down.

Russia, which supports Assad, launched its own separate bombing campaign against Assad's opponents nearly two months ago. While it says it is also targeting Islamic State, most of its air strikes have been against other Assad opponents, including groups actively supported by Turkey.

"Communication and coordination in Syria operations is needed in order to prevent further incidents, because two different coalition groups are conducting operations in Syrian air space always risk leading to similar incidents," he said before getting on a plane to Brussels for a meeting on the migrant crisis with EU leaders.

Turkey is a major customer of Russian natural gas exports and a big destination for Russian tourists. Russia buys Turkish exports including produce, having already banned food from the United States and European Union in retaliation for financial sanctions imposed over Moscow's intervention in Ukraine.

Turkey is one of the neighbours most affected by the 4-year-old civil war in Syria, having hosted 2 million refugees while calling loudly for the downfall of Assad. It has been angered by the Russian military campaign in Syria, complaining in particular in recent weeks about Moscow's targeting of ethnic Turkmen rebels in the border area, who are close kin with Turks.

Pro-government newspaper Sabah Daily reported that Turkey had tightened security along its border with Syria on Saturday, deploying additional tanks, armoured personnel vehicles and other weapons alongside its border with Syria. A Turkish official said he could not confirm this. -Reuters