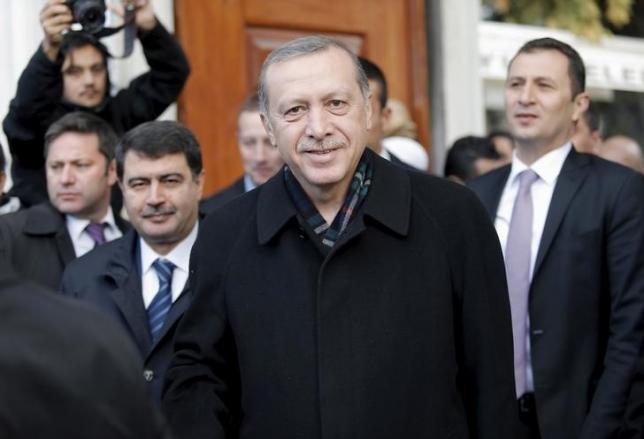 ANKARA/ISTANBUL – Turkey's incoming government should prioritise a new constitution, President Tayyip Erdogan said on Tuesday, reviving calls for an executive presidency even as Europe signalled concern it could concentrate too much power in his hands. His comments were echoed by Prime Minister Ahmet Davutoglu, who said a new constitution must ensure freedoms and be based on the separation of powers. He also said the ruling AK Party would embark on a series of reforms in the next six months. Emboldened by the AKP's sweeping electoral comeback on Nov. 1, Erdogan has stepped up his appeal for a presidential system similar to that of the United States or Russia, something his critics fear that will only consolidate more power in the hands of an authoritarian leader who brooks little dissent. "The Nov. 1 election ushered in four years of stability and confidence. Let's make this period a time of reforms, prioritising a new constitution," Erdogan said at a commemoration ceremony for modern Turkey's founding father, Mustafa Kemal Ataturk. "The Turkish republic has enjoyed its best period in the last 13 years," he said, referring to the reign of the Islamist-rooted AKP, which he founded. "Now, we shouldn't be worried about changing the nature of the regime." The AKP took 317 of the 550 seats in parliament at the Nov. 1 snap parliamentary election, just shy of the 330 seats required to hold a referendum on changing the constitution. In the run-up to the vote, the government stoked fears that press freedom and rights were worsening in Turkey, a NATO member and a candidate for European Union membership. Security forces launched a crackdown on Kurdish militants in the southeast, while opposition media also came under pressure. On Tuesday, the European Commission urged Turkey to lift restrictions on media freedom, respect human rights and relaunch peace talks with Kurdish militants. In its annual progress report on Turkey, whose decade-long accession talks with the EU have largely stalled, the Commission also noted with concern perceptions that Erdogan had overstepped his constitutional role. SYSTEM OF TENSION A new constitution would help fix a system that creates tension between the president and the prime minister, Davutoglu said in an interview with state broadcaster TRT. A former political science professor and newspaper columnist, Davutoglu has been unable to step out of Erdogan's shadow, even though the presidency is traditionally a largely ceremonial role. Davutoglu said Turkey would embark on a major reform process in the next six months and would carry out economic, social and judicial reforms, without giving further details. "We should create a free constitution, compatible with universal values," he said. Investors hope the AKP's victory could revive long-neglected economic reform plans to bolster fiscal discipline, boost the savings rate and overhaul the tax code. Party insiders said last week it was engulfed by an internal row over economic policy, as Erdogan's aides touted populist consumption-driven growth plans while the technocratic wing lobbied for reform. Structural reforms could help Turkey see growth of 4 percent or more next year, Finance Minister Mehmet Simsek said on Monday. –Reuters