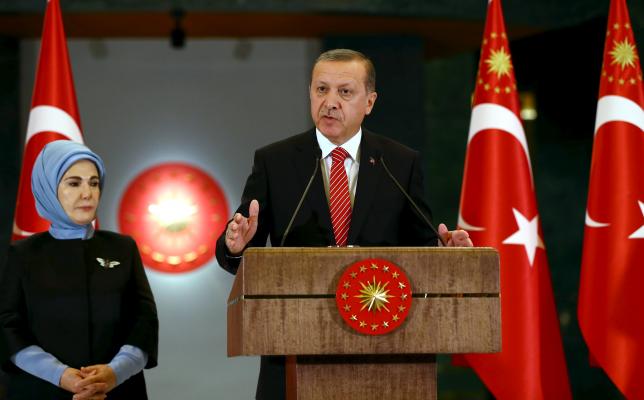 ISTANBUL - President Tayyip Erdogan said on Wednesday Turkey did not want any escalation after it shot down a Russian fighter jet, saying it had acted simply to defend its own security and the "rights of our brothers" in Syria. Speaking at a business event in Istanbul, Erdogan said the jet had been fired at while in Turkish air space but had crashed inside Syria, although some parts of the plane landed in Turkey and injured two Turkish citizens. "We have no intention of escalating this incident. We are only defending our own security and the rights of our brothers," Erdogan said, adding Turkey's policy in Syria would not change. "We will continue our humanitarian efforts on both sides of the (Syrian) border. We are determined to take all necessary measures to prevent a new wave of immigration." The shooting down of the Russian warplane near the Syrian border on Tuesday was one of the most serious publicly acknowledged clashes between a NATO member country and Russia for half a century. Russian President Vladimir Putin said the plane had been attacked when it was 1 km (0.62 mile) inside Syria and warned of "serious consequences" for what he termed a stab in the back administered by "the accomplices of terrorists". A US official told Reuters on Tuesday that Washington believed the jet was hit inside Syrian air space after a brief incursion into Turkey, an assessment based on detection of the heat signature of the aircraft. But Turkey, in a letter to the UN Security Council, said it shot down the jet in its air space. Along with a second plane, the aircraft flew more than a mile into Turkey for 17 seconds despite being warned 10 times while approaching to change direction, the letter said. -Reuters