During the meeting, matters of mutual interest, including military-to-military relations, regional security situation and measures to further enhance defense cooperation between both the countries were discussed.

The Turkish Chief of General Staff appreciated achievements of Operation Zarb-e-Azb and paid rich tributes to Pakistan’s sacrifices in bringing peace and stability in the region.

The visiting dignitary was accompanied by a high-level delegation. During the bilateral talks, matters of mutual interest with emphasis on geostrategic situation and security challenges came under discussion. Both sides reaffirmed the resolve to further enhance cooperation between the two armed forces. 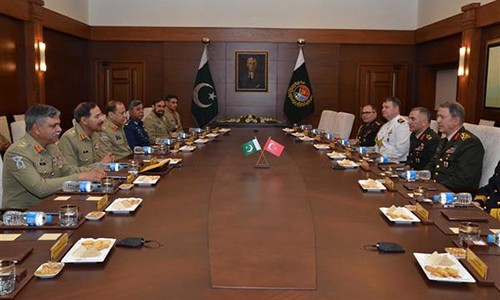 The visiting dignitary lauded the professionalism of Pakistan armed forces and acknowledged the sacrifices rendered by Pakistan in fight against terrorism.

Earlier on arrival at Joint Staff Headquarters, the visiting general was presented the guard of honour by a smartly turned out contingent of tri-services.