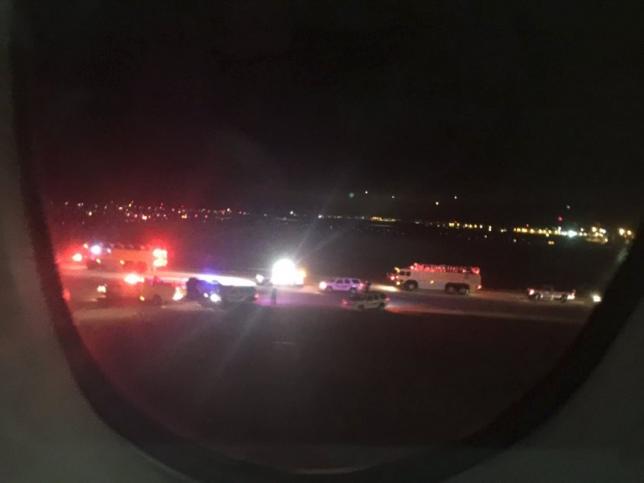 LOS ANGELES - Two Air France flights en route to Paris from the United States were diverted following anonymous bomb threats, and hundreds of passengers and crew were safely removed, the airline and the Federal Aviation Administration said. Flight 65, an Airbus A-380 that departed from Los Angeles landed safely in Salt Lake City, where passengers and crew were being taken off the plane and escorted into the terminal, an FAA spokesman said. The Salt Lake Tribune, citing an airport official, reported the plane was carrying 497 passengers and crew. A separate flight that left Dulles International Airport outside Washington, D.C., Flight 55, was diverted to Halifax International Airport in Nova Scotia, where passengers and crew had also disembarked. The Halifax Airport tweeted that 262 passengers and crew members had been aboard. In a brief statement, Air France said both flights had been the "subjects of anonymous threats received after their respective take-offs." "As a precautionary measure and to conduct all necessary security checks, Air France, applying the safety regulations in force, decided to request the landings of both aircraft," the airline said in its statement. "Local authorities are carrying out complete inspections of the aircraft, their passengers and their luggage," the statement said. “An investigation will be led by the authorities to identify the source of the telephone call.” Security officials have been on high alert since last week's deadly attacks in Paris, claimed by Islamic State militants, killed 129 people. Russia has said the group was also responsible for the downing on Oct. 31 of a plane returning to St. Petersburg from the Sharm al-Sheikh resort in Egypt, killing all 224 on board. The Royal Canadian Mounted Police in Halifax said on its Twitter feed that it was responding to a bomb threat against the Air France plane that had landed there. "RCMP will be searching the Air France plane using police dogs trained in explosives,” RCMP Nova Scotia said in a tweet. Halifax airport spokesman Peter Spurway said the Air France Boeing 777 jet was diverted to Halifax at 10:15 p.m. eastern time/0315 GMT and was currently parked at the end of the airport’s main runway. "It’s an RCMP matter," Spurway said referring to the Royal Canadian Mounted Police. "The passengers are being deplaned at this point and being transferred to a secure area of the terminal building because they’re international passengers." "Several law enforcement agencies are working in concert, following established protocol, to determine the nature of the threats which caused the aircraft to divert," FBI Special Agent Todd Palmer, of the agency's Salt Lake City division, told CNN. An FBI spokesman in Los Angeles declined to comment on the incidents when reached by Reuters, referring calls to the agency's Salt Lake City office. Representatives there could not immediately be reached. -Reuters