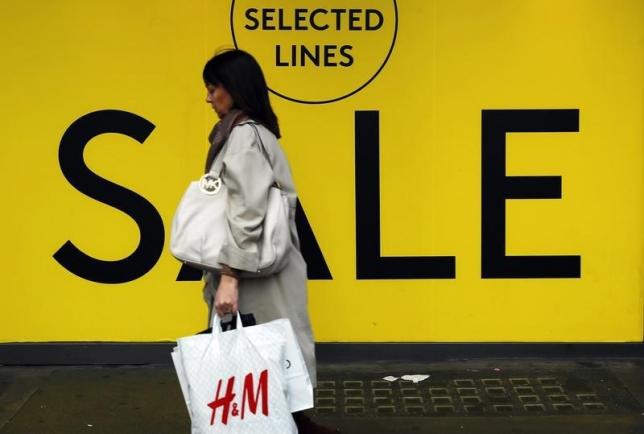 LONDON - British retail sales growth cooled last month, marking the weakest performance for the month of October since 2008, according to a survey from the British Retail Consortium on Tuesday. The BRC said the total value of retail sales between Oct. 4 and Oct. 31 was 0.9 percent higher than in the October period of 2014, down from a 3.9 percent surge in September. The slowdown may have been partly down to shoppers holding off for the November "Black Friday" sales, which have become increasingly popular over the last few years in Britain, the BRC said. "October was a somewhat disappointing month overall for retailers, with just 0.9 percent growth, slower than the three and twelve-month averages," Helen Dickinson, the BRC's chief executive, said. She added that furniture and clothing sales were bright spots last month. Spending on a like-for-like basis, a measure which strips out changes in floorspace and is preferred by some equity analysts, fell 0.2 percent year-on-year in October after a 2.6 percent rise in September, the BRC said. Official data showed total retail sales volumes rose 6.5 percent on the year in September, boosted by bumper beer sales linked to the Rugby World Cup hosted in England and Wales. -Reuters